The Bold and the Beautiful Spoilers: Steffy Learns She Adopted Beth – Protects Family Dreams, Wants Lope Baby for Herself?

BY Kinsley Goldman on January 15, 2019 | Comments: one comment
Related : Soap Opera, Spoiler, Television, The Bold and the Beautiful 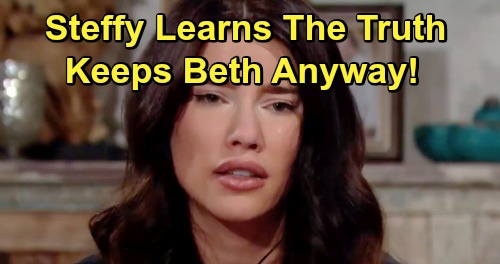 The Bold and the Beautiful (B&B) spoilers tease that Steffy Forrester (Jacqueline MacInnes Wood) will look forward to raising her new daughter. It’ll be a lot to process at first, but Steffy will ultimately get used to the idea. She’ll soon become excited about fulfilling her greatest wish. Giving Kelly Spencer (Zoe Pennington) a sister she can be close to is Steffy’s deepest desire.

Kelly is still quite small, so adding a newborn to the family will be a major adjustment. However, Steffy is a strong, capable mom. She’s also got a nanny and a devoted mother to back her up. Dr. Taylor Hayes (Hunter Tylo) will gladly pitch in on diaper duty and whatever else Steffy needs. She’ll be equally thrilled about Steffy’s decision to go for it.

Of course, there’s a huge problem here. Dr. Reese Buckingham (Wayne Brady) is the brains of this B&B operation and he’s keeping some serious secrets. It’s obvious that Reese faked Beth’s death and is now trying to sell her. Taylor has become Reese’s naïve target. He’s using her to drag Steffy into this and get the money he needs.

Once Steffy brings her new baby girl home, the countdown to secret spillage will be on. Taylor may be the first to learn the truth. Suspicions could emerge eventually, which could lead to a confrontation with Reese. He may end up having to admit his scheme, but Taylor will destroy Steffy’s family if she blabs. She may not be willing to do that to her daughter.

Nevertheless, Taylor is rather jittery when she’s got something to hide. It may not be long until Steffy guesses something’s up and figures the secret out. That’s when the drama could really get good! Steffy will have bonded with the baby by then. She won’t want to give up her second daughter. Besides, Steffy would fear Liam Spencer (Scott Clifton) and Hope Spencer’s (Annika Noelle) reaction.

Hope and Liam will be robbed of all their first milestones with Beth. Steffy will be the one who gets to experience all of those. Since The Bold and the Beautiful spoilers say “Lope’s” marriage could take a hit, Liam may be inching toward a reunion with Steffy when she learns the swap shocker. She may not want to rock the boat and tear apart the perfect family she’s finally getting.