BY hellodrdavis on January 28, 2019 | Comments: 6 comments
Related : Soap Opera, Spoiler, Television, The Bold and the Beautiful 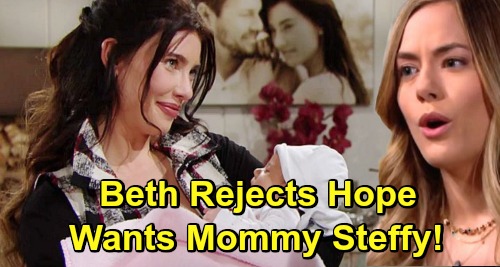 The Bold and the Beautiful spoilers tease that Steffy Forrester (Jacqueline MacInnes Wood) will make it official and formally adopt the baby that she believes was born to Florence ‘Flo’ (Katrina Bowden). Sure, the adoption came about quickly, but Steffy has no reason to believe that there is anything illegal about it. She’ll just believe that she came across the right opportunity at the right time.

Of course, the truth is that the baby she’s adopting is actually Beth Spencer. Reese Buckingham (Wayne Brady) kidnapped Beth after she was born to an unconscious Hope Spencer (Annika Noelle). He then led Hope and Liam Spencer (Scott Clifton) to believe that Beth died while he went on to offer Beth to Taylor Hayes (Hunter Tylo) for adoption to Steffy.

But the truth about Beth will remain under wraps for the unforeseen future. According to B&B spoilers, Steffy will name her new daughter Phoebe Forrester and will bring little Phoebe home to live with herself and Kelly Spencer (Zoe Pennington and Chloe Teperman). Steffy’s greatest wish is for Kelly to develop a close bond with a sister, and she’ll be on the path to making that happen.

There will be a lot of bonding going on, as Steffy becomes a mom to Phoebe in every sense. Liam will even get involved in taking care of Phoebe, since this is own daughter’s sister. Attachments form pretty quickly with babies, and Steffy will be at an advantage getting Phoebe very early in her life. Soon, their little family will be inseparable.

But what’s going to happen when the truth finally comes out about who Phoebe really is? Sooner or later, everyone is going to learn that Phoebe is actually Beth, and Hope is going to be overwhelmed by the discovery. She’ll surely want her baby back in her own arms asap.

But there could be a real problem with that. Once Beth has bonded with Steffy as her “mom,” it could be extremely difficult for her to accept a new mom who is completely foreign to her. Hope may be Beth’s actual mom, but Beth won’t know that. She’ll just know Steffy as her mom.

At some point, Steffy will have to turn Beth back over to Hope, but the transition could be quite rocky, especially if Hope has difficulty connecting with her child at first.  It would be truly tragic, but Hope might not be able to comfort Beth or calm her down when she’s agitated…simply because she hasn’t had time to bond with her like Steffy has.

If this happens, then Steffy might have to step in and help Hope parent Beth for a while, which is something that Hope may or may not welcome. It could serve to prolong the inevitable conflict between the two women that will occur when Hope finds out that Steffy had her baby all this time.

At any rate, we should’t expect that Steffy will be able to just hand Beth over to Hope and expect everything to go smoothly, especially since Steffy will have had weeks or months of bonding time with Beth first. Fair or not, it will probably take a lot of patience on Hope’s part to make the transition successful.

Do you think that Beth will reject Hope once Hope finally gets her back? Stay tuned to the CBS soap and don’t forget to check CDL often for the latest Bold and the Beautiful spoilers, updates, and news.