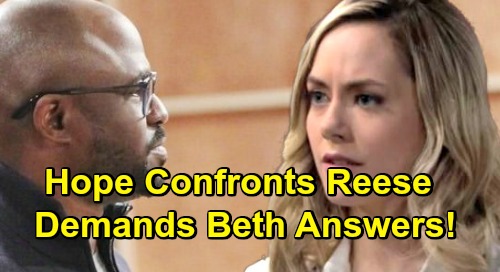 The Bold and the Beautiful (B&B) spoilers tease that Hope Spencer (Annika Noelle) will head to the doctor’s office this week. She didn’t make it home with a baby, but she still endured a difficult delivery. Hope will need a checkup to make sure she’s healing properly, but it looks like everything will be pretty routine.

The real shocker will come when Hope runs into Dr. Reese Buckingham (Wayne Brady). He’ll be at her doctor’s office at exactly the wrong time – for him anyway! The Bold and the Beautiful spoilers say Reese will panic as Hope corners him. She’ll be upset, so she’ll start demanding answers about the birth of her daughter.

B&B fans can expect some tricky moments for Reese. He’ll try to get out of there, but Hope won’t let him pass. She’s been drowning in sorrow ever since she learned Beth Spencer didn’t make it. Hope hasn’t been able to find the closure she’s desperate for. She keeps searching for a sign, but none have appeared.

Hope will think Reese might be able to help her somehow, so she won’t take no for an answer. She’ll be desperate to gain some peace, so she’ll grill him about what really happened that night. Her trip to Catalina Island will haunt her for the rest of her life, so she’ll think she deserves the whole story.

Of course, Reese can’t spill that he gave Hope another woman’s dead kid and sold Beth for serious cash! Instead, Reese may just reiterate that there was nothing that could be done. He’ll want Hope to know he feels terrible about that clinic ordeal. Reese will assure Hope that the ordeal’s been weighing heavily on his mind. He’ll express his condolences and once again try to make a break for it.

Hope will have to let Reese pass sooner or later, but will his suspicions tip her off to any trouble? She might feel like something’s off, but what doesn’t seem off in Hope’s world right now? It’s doubtful Hope will have any kind of shocking realization for a while. The Bold and the Beautiful will drag this out for drama’s sake, so expect some twists and turns.

It sounds like things are heating up on the CBS soap. We’ll give you updates as other news comes in. Stay tuned to B&B and don’t forget to check CDL often for the latest Bold and the Beautiful spoilers, updates, and news.