The Bold and the Beautiful Spoilers Next 2 Weeks: Hope’s Instant Love for ‘Phoebe’ – Reese Flees Country Over Baby Swap 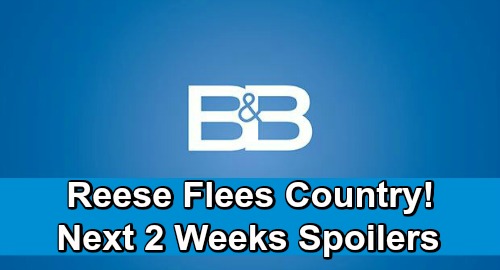 The Bold and the Beautiful (B&B) spoilers for the next two weeks tease that more hot drama’s ahead on the CBS soap. During the week of January 28-February 1, Dr. Reese Buckingham (Wayne Brady) will leap into action. When he spots one of the thugs closing in on Zoe Buckingham (Kiara Barnes), he’ll refuse to stand by and let her get hurt or killed.

Reese will run onto the sound stage during the talent show audition. He’ll catch Zoe off guard and potentially irritate her a bit, but at least he’ll save life. Afterward, Zoe will ponder Reese’s apparent mess. She’ll try to figure out what Reese has been up to and why he’s in so much trouble.

Florence “Flo” Fulton (Katrina Bowden) will worry about her own part in Reese’s chaos. She’ll really start to regret signing up for this, but she’ll stick to the plan anyway. Flo will just hope neither one of them faces consequences for this. She’ll be eager to get this adoption wrapped up and get out of town ASAP.

Of course, this adoption is actually far from legal. Despite Ridge Forrester’s (Thorsten Kaye) delight over the news he’s going to be a grandpa again, he’ll feel like this is a weird situation. Ridge will ultimately confront Dr. Taylor Hayes (Hunter Tylo) about the shadiness of it all. He won’t have a good feeling about Steffy adopting this baby.

Other Bold and the Beautiful spoilers say Liam Spencer (Scott Clifton) will tell Hope Spencer (Annika Noelle) the truth. She’ll learn about Steffy’s addition to the family and try to process that.

B&B fans can expect Hope to wrestle with a mix of jealousy, pain, anger and even some level of happiness. Hope isn’t heartless, so she won’t be a total Debbie Downer. Part of her will be glad for another mom’s joy.

Later, Hope will bump into Reese while she’s at her doctor’s office. She’ll pester him for more information on what went down on Catalina Island. The Bold and the Beautiful spoilers say Reese will be shaking in his boots!

After Hope suggests Liam should spend more time with Steffy and the girls, Brooke Forrester (Katherine Kelly Lang) will grow nervous. She’ll fret about Hope losing even more through a potential “Steam” reunion.

During the week of February 4-8, Reese will deliver a shocker. He’ll fill Zoe in on his plans, which will likely include a rushed move out of the country. It appears Reese will want Zoe to come along, presumably to avoid any further thug threats or backlash over the baby swap.

Zoe won’t want to leave her life and career behind, but Reese will do his best to convince her. It won’t be long until Zoe’s digging deeper. She’ll be on the verge of finding out about the baby scheme soon. Over with Hope, she’ll meet “Phoebe” and feel an instant bond. The overwhelming love Hope feels almost be too much for her heart to handle.

It looks like all the baby mayhem will bring some intriguing scenes. We’ll give you updates as other details emerge. Stay tuned to B&B and don’t forget to check CDL often for the latest Bold and the Beautiful spoilers, updates, and news.