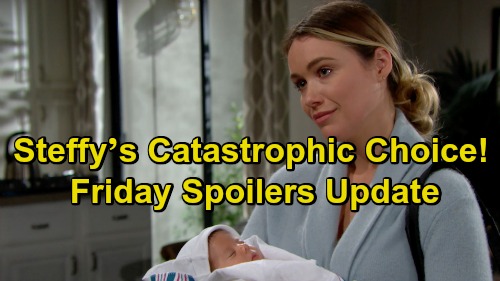 The Bold and the Beautiful (B&B) spoilers for Friday, January 25, tease that some talent show auditions are coming up. Zoe Buckingham (Kiara Barnes) will decide to sign up for this fun competition. She’ll think it’s sounds like a great opportunity to be seen and heard. Zoe’s never been one to shy away from attention!

Of course, Zoe really needs to be flying under the radar right now. She doesn’t know it yet, but she’s in grave danger. Zoe can tell that her dad’s probably in over his head, but Dr. Reese Buckingham (Wayne Brady) doesn’t want to worry his daughter. He also doesn’t want Zoe asking too many questions that could lead back to the baby swap. It’s better for Reese to pretend everything’s just fine.

However, it’s clear that things are growing increasingly dire. The thugs want their money now, but Reese can’t deliver until he gets an adoption payment. That’s why the thugs will take action on Friday. They’ll close in and plot some serious damage – or at least scare Reese enough to hurry this process along.

B&B fans can expect some other characters to try out for this talent show. Emma Barber (Nia Sioux) will want to put her talent on display as well, so she’ll head on over. Her bestie, Tiffany (Maile Brady), will also have some talent to offer. They’ll join Zoe as hopeful contestants at this exciting event.

Unfortunately, those thugs could be a real problem. Reese is doing his best to watch out for Zoe, so he’ll sense trouble soon enough. He’ll realize Zoe could be harmed at the upcoming talent show, which means total panic will set in. Next week, Reese will race to Zoe’s location as he tries to stop a violent attack.

Other Bold and the Beautiful spoilers say Steffy Forrester’s (Jacqueline MacInnes Wood) baby plan will press on. She just informed Dr. Taylor Hayes (Hunter Tylo) that she wants to adopt this little girl, so she’ll be ready to make it official ASAP. Steffy still wants Liam Spencer (Scott Clifton) and Kelly Spencer (Zoe Pennington and Chloe Teperman) to interact with the baby first, but she’ll trust that they’ll fall in love with her just as fast.

Since “Phoebe Forrester” (Rosalind Aune and Isabella de Armes) is actually Beth Spencer, The Bold and the Beautiful spoilers say Steffy’s choice will set up even more drama. We’ll give you updates as other B&B news comes in. Stay tuned to the CBS soap and don’t forget to check CDL often for the latest Bold and the Beautiful spoilers, updates and news.