BY hellodrdavis on January 24, 2019 | Comments: one comment
Related : Soap Opera, Spoiler, Television, The Bold and the Beautiful 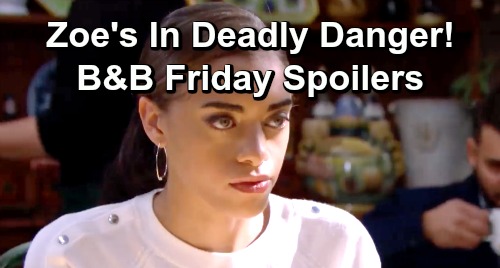 The Bold and the Beautiful spoilers for Friday, January 25, tease that Reese Buckingham’s (Wayne Brady) actions will put his daughter Zoe Buckingham (Kiara Barnes) in serious danger. Up until now, the thugs that have been hounding Reese to pay his $200,000 gambling debt have just talked a good talk. They’ve followed Zoe and threatened to harm her, but so far no harm has come to her.

But it seems that Reese’s debtors are getting more and more impatient. He’s promised to pay them eventually, but he keeps insisting that he needs more time. It looks like the thugs will decide to show Reese that they mean business by physically harming Zoe.

Completely unaware that she’s in danger, Zoe will go to an audition for a Hollywood talent show with Emma Barber (Nia Sioux) and Emma’s best friend Tiffany (Maile Brady). But there will be someone trailing Zoe – a bad guy who’s determined to hurt her to prove a point to Reese. Will he actually get to Zoe?

Meanwhile, on the new B&B episode on Friday, January 25, Steffy Forrester (Jacqueline MacInnes Wood) will make a huge decision. She immediately fell in love with the baby being passed off as Flo’s (Katrina Bowden), and ever since, she has been picturing the baby and Kelly Spencer (Chloe Teperman and Zoe Pennington) bonding as sisters.

Steffy will welcome Flo and the baby into her home, and she’ll get to see Kelly respond to the baby. She’ll also get Liam Spencer’s (Scott Clifton) take on whether he thinks that the baby – who is actually his daughter Beth Spencer – would be a good sister for Kelly. The visit will go wonderfully, and Steffy will decide that she wants to adopt the baby.

Of course, this decision will have serious ramifications on many lives. Beth Spencer will become Phoebe Forrester, and Hope Spencer (Annika Noelle) will have to be told that Steffy has adopted a baby…something that won’t be easy for Hope to deal with. And given Liam’s involvement in helping Steffy select the baby, Hope and Liam may have some difficulties to work through.