BY Heather Hughes on January 28, 2019 | Comments: one comment
Related : Soap Opera, Spoiler, Television, The Bold and the Beautiful 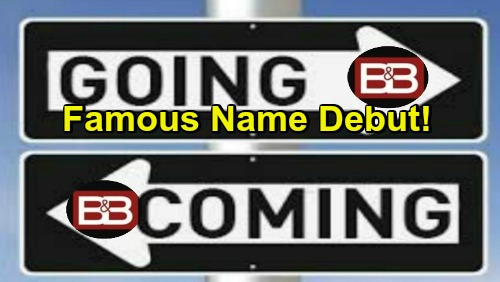 The Bold and the Beautiful (B&B) spoilers reveal that we’ve got some comings and goings news to pass along. For starters, Maile Brady (Tiffany) will appear for a musical performance on January 28. Tiffany will show off her skills at her talent show audition along with Zoe Buckingham (Kiara Barnes) and Emma Barber (Nia Sioux).

B&B viewers can also catch Guy Nardulli as one of the vicious thugs on January 28. If Nardulli looks familiar, perhaps you’ve seen him on another soap. Nardulli has also had appearances on Days of Our Lives, General Hospital as well as The Young and the Restless. It’s nice that Nardulli’s added The Bold and the Beautiful to complete the list.

Next, Jeanne Chin will pop up as Dr. Lin on January 30. The Bold and the Beautiful spoilers say Hope Spencer (Annika Noelle) will head to a doctor’s appointment and most likely get a clean bill of health. However, Dr. Reese Buckingham (Wayne Brady) will probably be close to a heart attack when he spots Hope in the office!

B&B fans can expect an intense grilling session. Hope still has questions about what happened after she passed out. Since she didn’t actually witness anything, Hope has to rely on Reese’s version of events. Of course, he hasn’t been divulging much of anything for obvious reasons. He wants to keep his baby switch plot under wraps.

Nevertheless, Hope will push Reese to recap all the drama. He’ll do whatever he can to make Hope believe Beth Spencer died because of an unpreventable complication. On January 31, Reese will meet up with Mr. Thicke (Joey Travolta). It seems the thugs’ boss will finally step in for the last portion of the gambling debt story.

Travolta’s name will undoubtedly ring a bell. He’s the brother of John Travolta and Ellen Travolta, who played Gloria Cerullo on General Hospital from 1994-1996. The Bold and the Beautiful spoilers say Mr. Thicke will get his money, but he’ll also be begged for reassurance. Reese will just want to be certain that Zoe is safe.