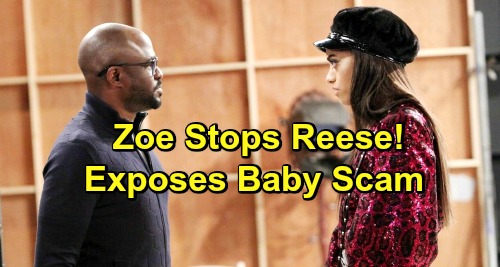 The Bold and the Beautiful spoilers tease that Reese Buckingham (Wayne Brady) is a man with a plan. He recently told Taylor Hayes (Hunter Tylo) that he had been offered a transfer out of Los Angeles. According to Reese, after what happened on Catalina with Hope Spencer (Annika Noelle) losing her baby, he just needs to get away and get a fresh start.

Of course, that’s not the whole story. Viewers know that Reese likely plans to disappear off the face of the earth once he pays off his $200,000 gambling debt and can ensure that his daughter Zoe Buckingham (Kiara Barnes) is safe. He really can’t stay in Los Angeles and risk that Hope and Liam Spencer (Scott Clifton) will find out that he provided the baby for Steffy Forrester’s (Jacqueline MacInnes Wood) adoption.

So far, Reese has orchestrated the baby switch and adoption scheme perfectly. He’s got Taylor and Steffy believing that Florence (Katrina Bowden) is the baby’s birth mother, and nobody suspects that anything is awry with the adoption. Certainly no one suspects that Steffy’s baby is really an alive and well Beth Spencer.

But Reese isn’t home free just yet. There’s one person who may stand in his way of actually pulling this whole scam off and leaving town, and that’s his own daughter. Zoe’s been skeptical of her father ever since he suddenly appeared on the Los Angeles scene. His behavior has been sketchy and erratic, and she knows that he’s probably in some trouble.

According to B&B spoilers, Zoe will get so concerned about her father’s behavior that she’ll enlist Xander Avant (Adain Bradley) to help her investigate what he’s up to. She’ll figure that if Reese won’t tell her what’s going on, she’ll find out for herself what he’s gotten himself into.

That will lead Zoe to Florence, which means she’ll likely figure out that her dad was behind Steffy’s adoption. And if that happens, you can bet that Zoe will have a million questions for her dad about why he’s involved in an adoption and exactly what his relationship is to Florence.

So, Reese’s plan to quickly close the books on the adoption and get out of town will likely be thwarted by his own daughter. The more questions Zoe asks, the more Reese will realize that his daughter is on the verge of uncovering the real truth. And Reese will need to stick around to make sure that Zoe doesn’t uncover too much.

Do you think Zoe’s the one who will discover what Reese has done? Stay tuned to the CBS soap and don’t forget to check CDL often for the latest Bold and the Beautiful spoilers, updates, and news.