The Bold and the Beautiful Spoilers: Thursday, January 31 – Brooke and Ridge Have Doubts About Phoebe – Reese Wants Assurances 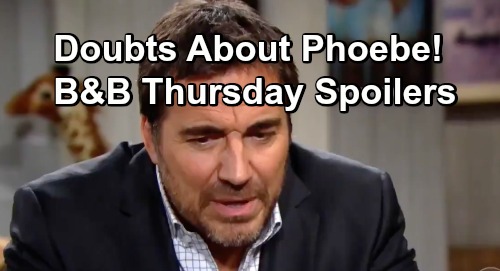 The Bold and the Beautiful spoilers for Thursday, January 31, tease that Reese Buckingham (Wayne Brady) will finally get what he’s been wanting. Now that Florence “Flo” Fulton (Katrina Bowden) has signed all the paperwork and handed over “her” baby to Steffy Forrester (Jacqueline MacInnes Wood), he’ll get his hands on the $200,000 payment from Taylor Hayes (Hunter Tylo).

This will allow Reese to finally pay off his creditors in Vegas. On Thursday’s episode, he’ll hand over the rest of the money he owes to one of the thugs who’s been following him and his daughter Zoe Buckingham (Kiara Barnes) around. But Reese won’t be satisfied just forking over the money; he’ll want some assurances that his daughter will now be left alone.

Of course, whether he gets those assurances remains to be seen. Reese has been keeping his creditors waiting for their money back, so they might not be so quick to consider Zoe in the clear. One thing’s for sure, Reese won’t want to leave Los Angeles until he knows that his daughter is out of harm’s way.

But they will find themselves wondering about a few pertinent details about the adoption. Ridge was floored when he discovered Taylor’s briefcase full of $200,000 cash at Steffy’s place. That sent up some red flags for him because it just seemed like an extreme amount to pay.

Brooke and Ridge will also note just how quickly the adoption came about. They might find themselves wondering about why the birth mother pushed for such a quick adoption. Of course, Steffy and Taylor will have good answers for everything, and the whole adoption will have been handled by Carter Walton (Lawrence Saint-Victor), so it will all seem legit.

Still, Brooke and Ridge will probably still have that nagging feeling that something about the whole process just doesn’t feel right. But for now they’ll have no choice but to accept it and welcome little Phoebe into the family.