The Bold and the Beautiful Spoilers: Hope Rejected, Remains A Stranger To Beth – Liam Bonds After Baby Swap Reveal 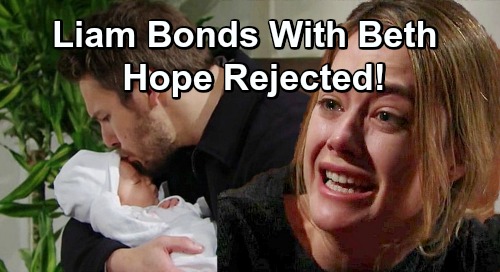 The Bold and the Beautiful spoilers tease that Steffy Forrester (Jacqueline MacInnes Wood) will soon get her wish. She’ll bring home her new baby girl and name her Phoebe Forrester (Rosalind Aune and Isabella de Armes). She’ll begin to bond with Phoebe, and Phoebe and Kelly Spencer (Chloe Teperman and Zoe Pennington) will start to bond as sisters.

But there’s someone else who will get in on all the bonding, and that’s Liam Spencer (Scott Clifton). Of course, Steffy has always been adamant that Liam spend as much time with Kelly as possible, but she’s also keen on him spending time with Phoebe as well. She’d like for him to become a father-figure to Phoebe.

And according to B&B spoilers, Hope Spencer (Annika Noelle) will also encourage Liam to spend time with Kelly and Phoebe, too. It seems that Liam will find the time with his daughter and Phoebe to be healing, and Hope will notice that it is good for Liam.

But Hope herself probably won’t want to be around Phoebe much. Given that she’s just lost Beth, it would be likely be too painful for her to be around a baby who’d be about the same age as Beth.

One has to wonder what’s going to happen when the truth eventually comes out about who Phoebe really is. Viewers know that Phoebe is actually Beth Spencer, who was stolen from Hope right after her birth. The Bold and the Beautiful spoilers say that at some point in the future, Hope and Liam will learn that Phoebe is their daughter, and they’ll want to be reunited with her as a family and take her home.

For Liam, this transition shouldn’t be too difficult, since he’ll already be bonded with Phoebe/Beth. But for Hope, things could be more difficult. She won’t have an established bond with the baby, and the baby could reject her because it wants a familiar person. Hope could find herself in the position of not being able to soothe or calm down her own baby, and that would surely be very distressing for her.

This could cause some serious tension between Hope and Liam. It could take a considerable amount of time for the baby to get used to Hope, and that could make Beth’s homecoming a real challenge for the couple.

Do you think Beth will have trouble bonding with Hope when she finally comes home? Stay tuned to the CBS soap and don’t forget to check CDL often for the latest Bold and the Beautiful spoilers, updates, and news.