The Bold and the Beautiful Spoilers: Friday, February 15 – Katie Tells Wyatt Marriage Is Over – Bill Wants Katie Back

BY hellodrdavis on February 14, 2019 | Comments: 2 comments
Related : Soap Opera, Spoiler, Television, The Bold and the Beautiful 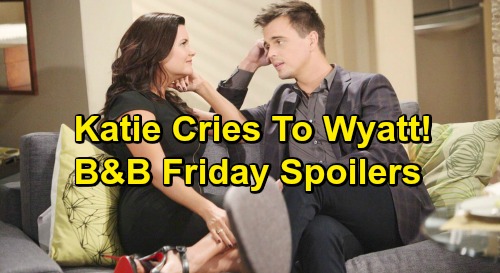 The Bold and the Beautiful spoilers for Friday, February 15, tease that Katie Forrester (Heather Tom) will reel from the big shock she got on Valentine’s Day. Katie will struggle to process that Thorne Forrester (Ingo Rademacher) no longer wants to be married to her, and as Thorne plans to move back to Paris, Katie will try to deal with her new reality.

As she goes about her day, Katie will run into her ex Wyatt Spencer (Darin Brooks), and he’ll notice that something’s clearly bothering her. Katie will reveal to a shocked Wyatt that Thorne presented her with annulment papers on Valentine’s Day. Wyatt will offer his support and comfort, as Katie’s clearly distraught over the development.

Meanwhile, on the new B&B episode on Friday, February 15, Bill Spencer (Don Diamont) will have a strategy session with Justin Barber (Aaron D. Spears) in his office. Bill will muse over how great things have been going with Katie and his son Will Spencer (Finnegan George), and he’ll wonder if there’s any chance of reclaiming his family.

Bill has been enjoying his “new Bill” persona, and especially all of the time he’s been spending with Will. Bill will wonder aloud whether he, Katie, and Will are ever going to have a shot at being a nuclear family again. Of course, Bill likely still thinks that Thorne stand in the way as an obstacle, but he’ll soon learn that Thorne’s out of the picture for good.

Once Bill knows that Thorne is out of the way, he’ll probably really ramp up his efforts to reclaim his family with Katie and Will. And he may have an important ally in that quest…Will himself. Will would probably like nothing more than for his parents to get back together.