BY hellodrdavis on February 14, 2019 | Comments: one comment
Related : Hot News, Soap Opera, Spoiler, Television, The Bold and the Beautiful 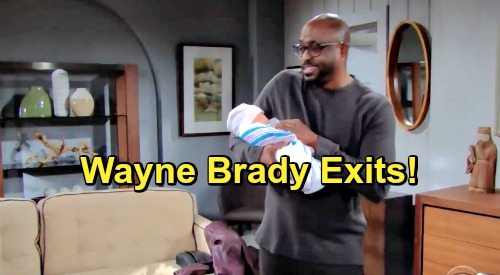 The Bold and the Beautiful spoilers tease that a major character will soon depart. Soaps.com is reporting that Wayne Brady, who portrays Dr. Reese Buckingham on the CBS soap, has wrapped his role and has departed B&B. Wayne recently celebrated his last day on the set with his co-stars and received a caricature drawing of his character Reese.

Hope and Liam are still under the belief that Beth died, and fans have been wondering exactly how long that story will play out, with Hope and Liam grieving needlessly. But given that (a) Zoe has just found out about the baby switch, and (b) Wayne Brady has just wrapped, it seems that the baby switch will be revealed to Hope, Liam, and Steffy sooner rather than later.

Given that B&B films about six weeks in advance, we can probably expect to see Reese on canvas for a few more weeks. That would be about right to accommodate a baby switch revelation story as well as a possible trial and punishment story for Reese.

There will be several characters who will be gunning for Reese after they learn what he did, and they’ll need to confront Reese and make sure he gets his due.

Plus, there will be major fallout from Reese’s actions that will have to play out. Chances are, this story won’t neatly wrap up in a few days, given that Steffy is going to have to turn baby Phoebe/Beth (Isabella de Armes and Redford Prindiville) over to Hope and Liam, and there will certainly be some conflict there.

There’s no word yet on Wayne’s final airdate, but we’ll keep you posted as news develops. Stay tuned to the CBS soap and don’t forget to check CDL often for the latest Bold and the Beautiful spoilers, updates, and news.