BY Heather Hughes on February 14, 2019 | Comments: one comment
Related : Soap Opera, Spoiler, Television, The Bold and the Beautiful 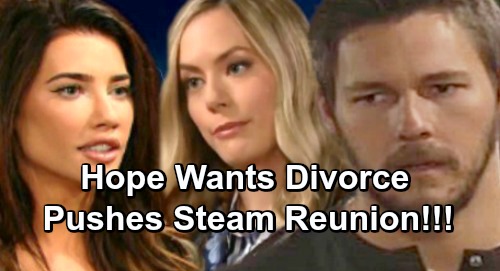 The Bold and the Beautiful (B&B) spoilers tease that Hope Spencer (Annika Noelle) will suddenly feel pessimistic about her future with Liam Spencer (Scott Clifton). Perhaps she’ll reflect on their reunion and determine that their baby was the only thing tying them together. Hope may feel like Liam wouldn’t have stayed with her if it hadn’t been for Beth Spencer.

Since Hope believes Beth is dead, she might think it’s time to set Liam free. Hope has seen how great Liam is with Kelly Spencer (Zoe Pennington and Chloe Teperman). Now that Steffy Forrester (Jacqueline MacInnes Wood) has added “Phoebe Forrester” (Isabella de Armas and Redford Prindiville) to the mix, Hope may feel like she’s standing in the way of “Steam” and the family they could have.

As painful as it’ll be to lose someone else close to her, Hope may think splitting up is the right call. It looks like she’ll take a page out of Thorne Forrester’s (Ingo Rademacher) playbook and drop a breakup bomb on Liam. Hope may argue that he should take advantage of the connection he feels with Steffy and the joy her children can bring to his life.

Of course, Liam will think Hope is letting her grief cloud her judgement. He’ll try to shut down any divorce talk, but Hope might elaborate on her reasons. Maybe Hope just won’t be sure their marriage can survive this devastating blow. She may suggest that they’ll always have this loss hanging over them. Hope could contend that with Steffy, Liam can have a fresh start and a chance to be happy again.

Hope won’t believe that same happiness is in the cards for her, but she won’t want to hold Liam back. The Bold and the Beautiful spoilers say they’ll have a major disagreement over this next week, so their relationship will soon be hanging by a thread. Nevertheless, Liam won’t let go that easily. He’ll realize Hope needs him now more than ever, so he’ll put some work into saving what they’ve built.

During new B&B episodes the week of February 25-March 1, B&B fans can expect Liam to fight for Hope. He’ll do whatever he can to save his marriage before it falls apart completely. Will Liam’s desperate efforts succeed? Will his failure bring more heartache instead? Either way, The Bold and the Beautiful spoilers say plenty of drama’s in store.

It sounds like Hope will keep sinking further and further into despair. Without enough “Phoebe” visits, Hope’s life will lose all meaning. She’ll struggle to keep it together, so things will get pretty dark for Hope in the coming weeks. We’ll give you updates as other B&B news emerges. Stick with the CBS soap and don’t forget to check CDL often for the latest Bold and the Beautiful spoilers, updates, and news.