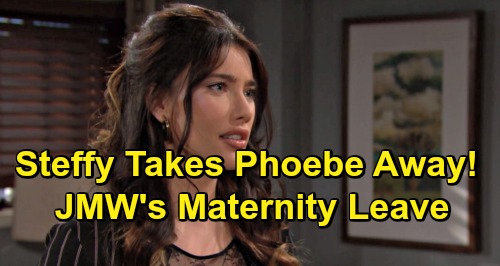 The Bold and the Beautiful (B&B) spoilers tease that Steffy Forrester (Jacqueline MacInnes Wood) will remain concerned about Hope Spencer’s (Annika Noelle) bond with “Phoebe Forrester” (Isabella de Armas and Redford Prindiville). She warned Liam Spencer (Scott Clifton) that Hope was growing too attached to this little one. Steffy just doesn’t think it can work as a long-term solution.

Liam downplayed Hope’s obsession with the baby, but Steffy insisted that “Phoebe” couldn’t be used as a replacement for Beth Spencer. Since “Phoebe” is the only source of comfort Hope can find, she’ll inevitably try to spend more time with her in the coming weeks. That could lead to more concerns and perhaps some shocking moves.

This seems like the kind of thing that could build to real drama. There are certainly ways for B&B to fuel conflict over the “Phoebe” issue. For example, they could have “Phoebe” start preferring Hope to Steffy. Maybe Hope could become the only one who can really soothe “Phoebe” when she gets fussy.

There could even be some babysitting confusion down the road. If Dr. Taylor Hayes (Hunter Tylo) arranges for Hope to watch “Phoebe” at the cabin and Steffy isn’t brought in the loop, she could panic. Steffy might fear “Phoebe’s” been kidnapped, so she’d naturally fume if she learned her adopted daughter was actually off bonding with Hope.

The Bold and the Beautiful could turn this into a big deal and force Steffy to take drastic action. She might argue that she’s “Phoebe’s” mom and needs time to connect with her…alone. We can’t forget that Jacqueline MacInnes Wood is pregnant and will have to take a maternity leave eventually. This would be the perfect plan to write Steffy out.

Steffy could explain her stance to Liam and contend that she needs to go away with the girls for a while. She could convince Liam to give up a few weeks with Kelly Spencer (Zoe Pennington and Chloe Teperman) so the three of them can bond elsewhere. Liam could probably get on board with that, especially if Hope’s well-being is the deeper motive.

Steffy may suggest that eliminating temptation would be good for Hope. Since Hope can’t stay away from “Phoebe,” Steffy may think they’ll just have to keep “Phoebe” away from Hope instead. Steffy might point out that this would finally force Hope to face her loss and deal with it properly.

Do you think Hope’s attachment issues will drive Steffy out of town with the baby? Will Steffy feel like she has to stop Hope and “Phoebe’s” visits? The Bold and the Beautiful spoilers say some hot scenes are coming up. We’ll give you updates as other B&B news emerges. Stick with the CBS soap and don’t forget to check CDL often for the latest Bold and the Beautiful spoilers, updates, and news.