The Bold and the Beautiful Spoilers: Thursday, February 7 – Liam Blames Himself For Beth’s Death – Wyatt and Sally Sister Shocker

BY hellodrdavis on February 6, 2019 | Comments: one comment
Related : Soap Opera, Spoiler, Television, The Bold and the Beautiful 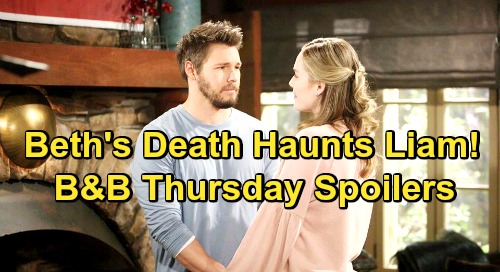 During their visit, Wyatt and Sally will notice something familiar about Phoebe. They’ll recognize that Phoebe actually looks a great deal like Kelly, and the’ll remark that the two girls could be blood relatives, given the resemblance. Steffy will probably love the comparison, as it will just reinforce the idea that the two girls were meant to be sisters.

But viewers know that Kelly and Phoebe are indeed sisters, so Wyatt and Sally’s comment will be prescient. They share Liam Spencer (Scott Clifton) as a dad, so they not only look alike, but they each resemble Liam. But will Wyatt and Sally pick up on their resemblance to Liam?

Meanwhile, on the new B&B episode on Thursday, February 7, Liam will have a major emotional breakdown. He’s been focusing most of his attention lately on being strong for Hope, who’s really been struggling with Beth Spencer’s death. And in doing so, Liam’s been bottling up a lot of his own feelings of grief and loss over the death of his daughter.

On Thursday’s episode, Liam will finally release some of his feelings, as he admits to Hope how guilty he feels over what happened to her and Beth on Catalina Island. Liam will tell Hope that he should have been with her from the get-go when she arrived on the Island, and that if he had, things might have turned out differently.

Of course, neither Hope nor Liam know that things would have turned out differently had Liam been there. And Hope will likely comfort Liam and offer him support as he blames himself for what happened. Hopefully, the two grieving parents will realize as they’re comforting each other that neither of them is to blame for what happened.