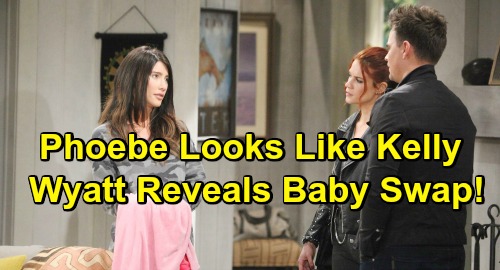 The Bold and the Beautiful (B&B) spoilers tease that Wyatt Spencer (Darin Brooks) and Sally Spectra (Courtney Hope) will pay a visit to Steffy Forrester (Jacqueline MacInnes Wood). Since Steffy just brought her new bundle of joy home, Sally and Wyatt will want to congratulate her. Steffy will be thankful that everyone’s been so supportive of her family addition.

Naturally, Sally and Wyatt will also want to take a peek at “Phoebe Forrester” (Rosalind Aune and Isabella de Armes). They’ll gush over how adorable she is and share in Steffy’s excitement on new B&B episodes this week, February 4-8.

However, something will hit Wyatt and Sally as they spend a few minutes with Phoebe. They’ll start to realize just how much she looks like her sister, Kelly Spencer (Zoe Pennington and Chloe Teperman).

It’ll be something that these two can file away for later. When you’re dealing with a baby mystery like this, there are inevitably going to be clues that come back into play after more buildup.

B&B fans know Dr. Reese Buckingham (Wayne Brady) set all this in motion. He swapped Beth Spencer for another woman’s dead child and gave her to Steffy, so that secret’s just waiting to be uncovered. It looks like Zoe Buckingham (Kiara Barnes) will be the first to learn the truth, but she’ll most likely stay quiet about it.

The Bold and the Beautiful will need someone else to find out this shocker – someone who’d be willing to spill the beans. Wyatt would be a good option. He had to watch as Hope lost their baby and now Beth. It’s tough to believe Wyatt could stay silent if he knew Phoebe was actually Hope’s daughter.

In an interview with Soap Opera Digest, Katrina Bowden (Florence “Flo” Bowden) suggested that Darin Brooks had been a huge help to her on set. “Darin has been great,” Bowden said. “He’s the person I read with when I read in front of the producers…” Does that mean Flo and Wyatt will have some scenes together down the road – isn’t this a big clue? Could Wyatt play a role in exposing the shocking truth?

It’d make sense, especially since Wyatt will notice Phoebe and Kelly’s resemblance. That could set off a chain reaction if a solid clue comes. The Bold and the Beautiful spoilers say more excitement’s ahead, so stay tuned.

We’ll give you updates as other B&B news comes in. Stick with the CBS soap and don’t forget to check CDL often for the latest Bold and the Beautiful spoilers, updates, and news.