The Bold and the Beautiful Spoilers: Hope Blames Taylor For Baby Swap Tragedy – Retaliates By Turning Her In For Bill’s Shooting

BY hellodrdavis on February 4, 2019 | Comments: one comment
Related : Soap Opera, Spoiler, Television, The Bold and the Beautiful 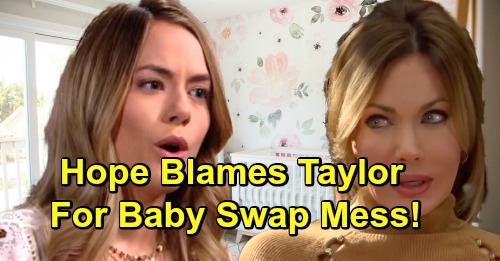 The Bold and the Beautiful spoilers tease that Taylor Hayes (Hunter Tylo) will find herself on the hot seat. Right now, all is bliss in Taylor’s world. Her daughter Steffy Forrester (Jacqueline MacInnes Wood) had adopted an adorable little girl and Taylor was able to make it all happen for her.

Now that little Phoebe Forrester (Rosalind Aune and Isabella de Armes) is getting settled into her new home and bonding with her new sister Kelly Spencer (Chloe Teperman and Zoe Pennington), everything seems grand.

And chances are, things will be idyllic for a while. But at some point, the truth about who Phoebe really is will come out. Zoe Buckingham (Kiara Barnes) is deeply suspicious of her dad Reese Buckingham (Wayne Brady), and she’s about to discover a connection between Reese and Steffy’s new baby.

She won’t put all the pieces together right away, but she’ll be onto something, and eventually it looks like she’s going to blow Reese’s baby swap wide open.

That means that it’s going to come out that Phoebe is actually Beth Spencer, who Reese kidnapped from Hope Spencer (Annika Noelle) after she lost consciousness during childbirth. Reese led Hope and Liam Spencer (Scott Clifton) to believe that Beth died, and he even presented them with someone else’s dead infant as “proof” that Beth was gone.

Once the truth comes out, of course Hope and Liam will be ecstatic to be reunited with Beth. But there will also be hell to pay for a few people. Hope and Liam are going to want blood from Reese. What he did was unthinkable and they’ll want him prosecuted to the fullest extent of the law.

They’ll likely go after Florence “Flo” Fulton (Katrina Bowden) as well, for her part in perpetrating an illegal adoption to Steffy. But there will be one more person who will get the wrath of Hope and Liam, and that’s Taylor, since Reese was her secret contact in brokering the adoption.

They’re going to be furious with Taylor for keeping the Reese angle secret from everyone as the adoption progressed, as that one detail could have blown the whole scam open and put Beth in their arms earlier.

And chances are, Hope’s going to be particularly upset with Taylor. Hope may even accuse Taylor of being in on the baby swap scam. No doubt accusations will fly and emotions will run high as Hope tries to get to the bottom of exactly what Taylor knew and the warning signs she might have ignored as she dealt with Reese and the adoption.

Of course, Taylor likely won’t be charged for any crime, since she was ultimately conned by Reese. And that will probably anger Hope something awful. She’ll probably think that Taylor deserves punishment for her role in what happened with Beth, and so she might take matters into her own hands.

Hope’s been sitting on some pretty damning information concerning Taylor. Hope knows that Taylor shot Bill Spencer (Don Diamont) last year in a fit of rage. It’s always bothered Hope that Taylor committed such a heinous act and got away with it, but she’s kept her silence on the matter out of respect for Steffy, and because Liam told her the news in confidence.

But what if Hope decides to get back at Taylor for her role in the baby swap/adoption scam by turning her in to the police for shooting Bill? It would take just one anonymous tip to Detective Sanchez (Jeremy Ray Valdez) to really jam up Taylor for months to come. Taylor could end up doing serious prison time for the shooting.

B&B spoilers say that the “who shot Bill” storyline is not over yet, and that we can expect more drama on that front. It’s entirely possible that Hope will kick off another round of investigation into Bill’s shooting by implicating Taylor. She’d probably find it to be fitting payback for the pain she’s endured that she finds Taylor to be partially responsible for.

Do you think that Hope will retaliate against Taylor and turn her in for Bill’s shooting? Stay tuned to the CBS soap and don’t forget to check CDL often for the latest Bold and the Beautiful spoilers, updates, and news.