BY Heather Hughes on February 4, 2019 | Comments: one comment
Related : Soap Opera, Spoiler, Television, The Bold and the Beautiful 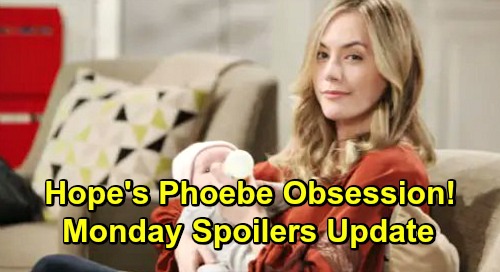 The Bold and the Beautiful (B&B) spoilers update for Monday, February 4, tease that Hope Spencer (Annika Noelle) will savor the moment. She just started cradling sweet Phoebe Forrester (Rosalind Aune and Isabella de Armes), so Liam Spencer (Scott Clifton) will be anxious to see how this plays out.

He knows he felt so much joy holding Phoebe, but he couldn’t be certain Hope would feel the same way. Fortunately, Hope will indeed feel like the weight of grief has lifted.

Her heart will be lighter as she cuddles Phoebe and appreciates the new life that’s come into the world. Hope doesn’t realize this is her own daughter, so she’ll find the connection she feels puzzling. Their instant bond will bring a flood of wonderful emotions, but the peace and happiness probably won’t last.

Sooner or later, Hope will have to hand Phoebe back to Steffy Forrester (Jacqueline MacInnes Wood) and go home to the baby-less cabin. She may be able to ride the wave of excitement for a while, but she still doesn’t have a child of her own to raise.

Now that Hope’s met Phoebe, B&B fans can expect a major obsession. Hope will become fixated on Phoebe from here on out, so there’s going to be trouble.

Other Bold and the Beautiful spoilers say Zoe Buckingham (Kiara Barnes) will get a visit from her dad. He’ll have updates on what his future’s going to look like – and those plans will include Zoe. It sounds like Reese will encourage Zoe to move away with him.

Reese won’t see why they can’t grow closer somewhere else, but Zoe will insist on staying put. She’s got her job and Xander Avant (Adain Bradley) to think about. Zoe will also wonder why Reese feels the need to leave in such a rush.

She’ll grill him about whatever shadiness he’s involved in, but Reese will promise that everything’s fine. He won’t want Zoe to worry, but he’ll be adamant about leaving LA.

The Bold and the Beautiful spoilers say Zoe will rummage through her father’s apartment later this week. She’ll be convinced that Reese’s must’ve left behind some trace of evidence. Once Zoe bumps into Florence “Flo” Fulton (Katrina Bowden), this storyline will head in a startling new direction.

B&B viewers won’t want to miss all the shockers ahead. We’ll keep you posted as other news comes in. Stick with the CBS soap and don’t forget to check CDL often for the latest Bold and the Beautiful spoilers, updates, and news.