The Bold and the Beautiful Spoilers: Hope Spirals Out of Control After Meeting Phoebe – Dangerous Behavior Panics Liam and Steffy

BY Kinsley Goldman on February 2, 2019 | Comments: one comment
Related : Soap Opera, Spoiler, Television, The Bold and the Beautiful 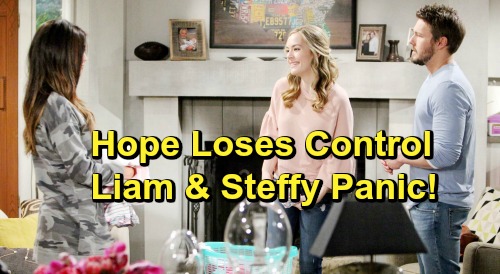 The Bold and the Beautiful (B&B) spoilers tease that Hope Spencer’s (Annika Noelle) world will quickly crumble. She put on a brave face after Liam Spencer (Scott Clifton) filled her in on Steffy Forrester’s (Jacqueline MacInnes Wood) new addition. As painful as it is, Hope’s trying to be happy for Steffy. She understands that Steffy’s not behaving maliciously, so she wants to be supportive here.

In fact, Hope met the baby and fans could see by her emotional reaction there will be trouble. Hope’s part of the extended family, so her welcome of Phoebe Forrester (Rosaline Aune and Isabella de Armes) is expected and she’ll to convince herself that she can get past this.

Bold and the Beautiful spoilers hint that Liam fears it’s too soon for Hope to hold another little one. He’ll feel like she’s finally getting a grip on her grief, so he won’t want to catapult her back into the despair pit.

However, Hope is adamant that this is what she wants. She might point out that Liam held Phoebe and was actually helped by it. Hope may argue that holding Phoebe could help her, too – sadly, B&B spoilers indicate that it won’t!

Once Hope took Phoebe in her arms, she felt an instant bond just like Liam did. The Bold and the Beautiful spoilers say Hope will be taken aback by the love in her heart. It’ll almost be too much for her to bear.

Hope got choked up as she held baby Phoebe and now she wishes this baby girl were her own. Well first of all, of course the baby is hers but second of all, Steffy and Liam don’t know this.

B&B fans know this is indeed Hope’s daughter, but she won’t find out that shocker just yet! Hope will enjoy meeting Phoebe, but the aftermath will be brutal. It turns out it won’t help her at all.

The only thing it’ll accomplish is sending Hope spiraling out of control as she begins to obsess about the child. She’ll sink into a darker place than ever, so expect some disturbing, volatile behavior. Liam is sure to be deeply concerned by Hope’s dangerous decline.

The Bold and the Beautiful spoilers say Hope’s struggles will get much worse before they get better. Can she ever move past all the mourning or will it take the truth about Beth Spencer to bring her out of this terrible state?