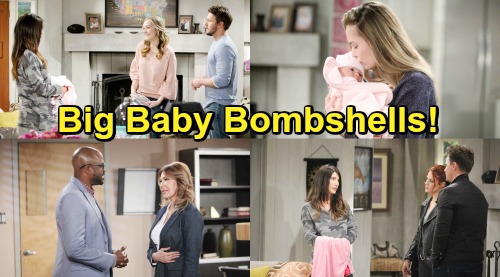 The Bold and the Beautiful (B&B) spoilers update for the week of February 4-8 tease that we’ll see strong suspicions and tight spots. First, Zoe Buckingham (Kiara Barnes) will wonder what’s up with her dad. Dr. Reese Buckingham (Wayne Brady) will let Zoe know that he’s leaving town right away. It seems he’ll urge Zoe to drop everything and come with him, but she’ll refuse to ditch her life in Los Angeles.

Zoe will demand answers about Reese’s strange behavior, but he’ll stay tight-lipped. After Reese catches his flight and takes off, Zoe’s curiosity will get the best of her. She’ll decide to head over to Reese’s apartment and look for any clues he might’ve left behind. B&B spoilers say Zoe will run into Florence “Flo” Fulton (Katrina Bowden) while she’s there, so things are about to get interesting!

Zoe will start grilling Flo about her connection to Reese. Flo may suggest that they had some business together, but Zoe will want to know what kind. She’ll refuse to drop this, but Flo will try to play it cool. She’ll sidestep Zoe’s tricky questions and hope she can get Reese’s nosy daughter off her back.

Flo will offer a flimsy explanation for how she knows Reese and why she was in LA. Zoe won’t buy it, so she’ll confront Flo again later. The Bold and the Beautiful spoilers say they’ll have a heated confrontation that should result in some shockers.

Over with Brooke Forrester (Katherine Kelly Lang), she’ll remain wary of the adoption and all the shadiness. As a result, Brooke will corner Steffy Forrester (Jacqueline MacInnes Wood) and seek info on the mysterious person who facilitated it. She’ll wonder what Steffy really knows about Dr. Taylor Hayes’ (Hunter Tylo) colleague.

Reese made it all happen, but Taylor has been able to keep his name out of it so far. Steffy may insist that she trusts Taylor’s judgment on this. She might push Brooke to stop worrying and drop it. Ridge Forrester (Thorsten Kaye) will also quiz Steffy and Taylor about the adoption details this week. He’ll continue to feel like something’s off about this whole arrangement.

Other Bold and the Beautiful spoilers say Hope Spencer (Annika Noelle) will be overwhelmed with love when she meets “Phoebe Forrester” (Rosalind Aune and Chloe Teperman). She’ll feel an instant bond with the baby when she holds her for the first time. Hope’s emotions will almost be too much to bear.

Later, Hope just won’t be able to stop thinking about “Phoebe” and how connected she feels to her. She’ll ask Liam Spencer (Scott Clifton) to take her to see the baby once again, so it’s clear that Hope will get attached quickly. The Bold and the Beautiful spoilers hint that Hope’s fixation could become problematic soon enough.

The week ahead will bring several exciting episodes, so fans won’t want to miss them. We’ll give you updates as other B&B news comes in. Stick with the CBS soap and don’t forget to check CDL often for the latest Bold and the Beautiful spoilers, updates, and news.