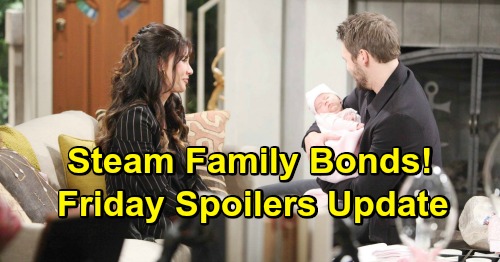 The Bold and the Beautiful (B&B) spoilers for Friday, February 1, tease that Florence “Flo” Fulton (Katrina Bowden) will be a nervous wreck over the bogus adoption. When Dr. Reese Buckingham (Wayne Brady) talked Flo into posing as this baby’s birth mother, she didn’t know what she was getting herself into. Flo feels like this spiraled into something far worse than she ever could’ve imagined.

There were dangerous thugs, deadly threats and manipulated moms who will remain the dark. Flo will battle guilt over Hope Spencer’s (Annika Noelle) suffering, but Reese may remind her that Zoe Buckingham (Kiara Barnes) is safe and Steffy Forrester (Jacqueline MacInnes Wood) is thrilled. “Phoebe Forrester” (Rosalind Aune and Isabella de Armes) will grow up in a good home, so Reese will think Flo should take comfort in that.

Flo will still feel lousy and worried about what the future holds. She may fear that their nightmare isn’t over, but Reese will believe they pulled it off. The money’s been paid, Steffy has her baby and Reese intends to get out of town as soon as possible. He’ll be anxious to put the whole ordeal behind him, so The Bold and the Beautiful spoilers say he’ll push Flo to move on as well.

Elsewhere, Brooke Forrester (Katherine Kelly Lang) will fret about Hope’s tricky situation. She understands that Hope wants to be supportive of Steffy and her dreams, but she’ll feel like her daughter’s going too far. Hope urged Liam Spencer (Scott Clifton) to welcome Kelly Spencer’s (Zoe Pennington and Chloe Teperman) sister home, but that could lead to unanticipated consequences.

B&B fans know Liam and Steffy have an unbreakable bond. They may not be married anymore, but there’s a lot of love left between them. As Hope encourages Liam to spend even more time with Steffy and the girls, they’ll inevitably become a strong family unit. Brooke may be concerned that Hope’s going to face more pain as a result. Hope could end up lonely as Liam hangs out at Steffy’s place more often.

There’s even a chance Liam will reunite with Steffy thanks to all this time together. That’s a chance Hope doesn’t need to take – at least according to Brooke. She’ll offer a gentle warning, but Hope won’t be able to think about anything except Beth Spencer. Liam and Steffy’s connection won’t even register as a threat since she’s so distraught over her daughter.