The Bold and the Beautiful Spoilers: Liam and Steffy’s Reunion Brings Perfect Steam Family – Bitter Hope Suffers on the Outside

BY Heather Hughes on January 31, 2019 | Comments: one comment
Related : Soap Opera, Spoiler, Television, The Bold and the Beautiful 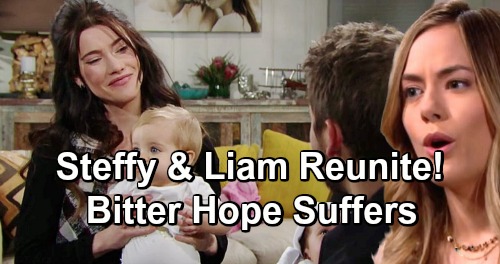 The Bold and the Beautiful (B&B) spoilers tease that Liam Spencer (Scott Clifton) may be on the verge of waffling again. B&B fans know Liam can never stick with one woman for too long. He’s always been a torn man when it comes to his love interests.

Hope’s been the leading lady in Liam’s life for a while now. They’ve got a sweet bond, which has seemingly grown as they’ve grappled with their loss. Beth Spencer’s “death” was a terrible thing for this couple to endure. They’ve been able to strengthen their connection so far, but that isn’t going to last.

Liam will begin to heal with a little help from Steffy, Kelly Spencer (Zoe Pennington and Chloe Teperman) and “Phoebe Forrester” (Rosalind Aune and Isabella de Armes). He already admitted his grief can’t even begin to compete with Hope’s. This baby grew inside her, so her level of mourning is different. It’s going to be much tougher for Hope to let go and move on.

To make matters worse, Hope won’t have this happy fam to lean on like Liam will. She’ll keep nudging him to hang out with Steffy and the girls, but she’ll secretly be dying inside. Hope may let her grief turn to anger and resentment. She might bottle it up until it explodes and completely destructs her marriage.

Plus, The Bold and the Beautiful spoilers say Liam will get quite close to Steffy again in the coming months. He wants to be the best dad he can be to Kelly. Liam also hopes to be a father figure for “Phoebe,” so she may end up calling him “Daddy” once she starts talking. They’ll become a family.

In other words, Liam will get almost everything he would get if he knew the truth. He won’t get the knowledge of their father-daughter bond or the peace of mind about Beth, but all the other pieces will fall into place. As for Hope, she’ll just have to suffer as Liam falls for his ex again and raises two precious girls.

Will Liam will add to Hope’s pain by reuniting with Steffy romantically? Will Hope be partially to blame thanks to the push she’s giving Liam and her looming bitterness? We’ll give you updates as other Bold and the Beautiful news comes in. Stay tuned to B&B and don’t forget to check CDL often for the latest Bold and the Beautiful spoilers, updates, and news.