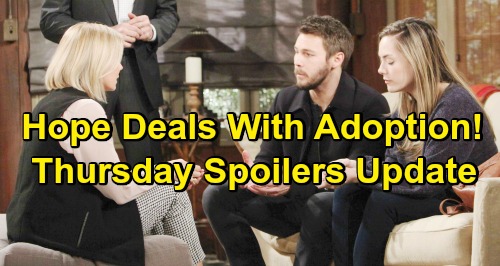 The Bold and the Beautiful (B&B) spoilers for Thursday, January 31, tease that Ridge Forrester (Thorsten Kaye) will battle more adoption anxiety. He was suspicious when he heard how fast Steffy Forrester (Jacqueline MacInnes Wood) was getting her new bundle of joy. That case filled with cash didn’t do much to ease Ridge’s mind. He can tell that something’s rotten about all this.

Dr. Taylor Hayes (Hunter Tylo) thinks Ridge is worrying over nothing, but he’ll remain fearful on Thursday. Ridge won’t want Steffy getting caught up in something risky. He may feel like the whole thing could fall through and leave her heartbroken. Brooke Forrester (Katherine Kelly Lang) will chime in on this as well. She’ll agree that this adoption seems iffy, but her primary concern will be her daughter.

Hope Spencer (Annika Noelle) has been living in world of unbearable grief since that night on Catalina Island. She can barely put one foot in front of the other. Brooke will naturally fret about how Hope’s going to handle Steffy’s new addition.

Steffy now has two gorgeous daughters while Hope’s left longing for just one. Hope desperately wishes Beth Spencer could’ve helped her start a family with Liam Spencer (Scott Clifton). Instead, she’ll have to watch Steffy build a bigger fam. That should be devastating for Hope, who’s still stuck in the worst of her mourning period.

Nevertheless, Hope will try to do the right thing. She’ll urge Liam to go connect with Kelly Spencer (Zoe Pennington and Chloe Teperman), “Phoebe Forrester” (Rosalind Aune and Isabelle de Armes) and even Steffy. She won’t want to stand in the way of Liam’s happiness and healing. Since Brooke will question Hope’s actions on Friday’s new B&B episode, we’d say Thursday may be Hope nudges Liam in that direction.

In the meantime, Dr. Reese Buckingham (Wayne Brady) will deliver the payment and hopefully end Zoe Buckingham’s (Kiara Barnes) dangerous crisis. The Bold and the Beautiful spoilers state that Joey Travolta, the older brother of John Travolta and Ellen Travolta, will appear as Mr. Thicke on Thursday. It looks like he’ll be the head honcho that Reese officially pays off.

B&B fans can expect Reese to nervously hand over the cash and demand a promise. He’ll just want to know for sure that Zoe will be left alone. The Bold and the Beautiful spoilers say Reese will get rid of this debt, but that won’t fix the adoption drama. He’s merely traded one problem for another!

Reese will have to live in fear that the truth will come out, but he’ll at least form some plans to protect himself next week, February 4-8. We’ll give you updates as other B&B news comes in. Stay tuned to the CBS soap and don’t forget to check CDL often for the latest Bold and the Beautiful spoilers, updates, and news.