BY hellodrdavis on January 31, 2019 | Comments: one comment
Related : Soap Opera, Spoiler, Television, The Bold and the Beautiful 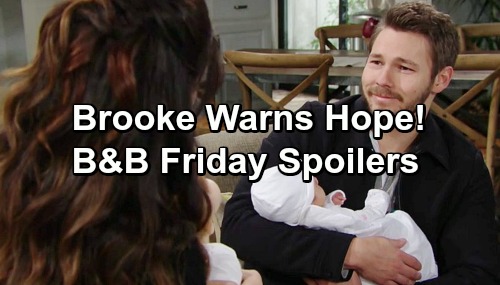 The Bold and the Beautiful spoilers for Friday, February 1, tease that Brooke Forrester (Katherine Kelly Lang) will go into protective mom mode with Hope Spencer (Annika Noelle). Hope’s just gotten the news that Steffy Forrester’s (Jacqueline MacInnes Wood) adoption went through, and she has mixed feelings about the whole thing. And Brooke will be right at Hope’s side to comfort her.

But Hope will likely tell her mother that she doesn’t begrudge Steffy her joy, and that she knows that Liam is going to be a father-figure to Phoebe no matter what, so she may as well not fight it. Still, Brooke will probably point out that Hope has needs too, and that right now she needs her husband by her side.

Meanwhile, on the new B&B episode on Friday, February 1, Florence “Flo” Fulton (Katrina Bowden) will be feeling gutted after relinquishing baby Phoebe to Steffy. Of course, Flo isn’t really Phoebe’s birth mom, but she’ll be overcome by the enormity of what she and Reese Buckingham (Wayne Brady) have done. They’ve perpetrated an illegal adoption together, and this will weigh heavily on Flo’s mind.

Reese will do his best to calm Flo’s nerves, and Flo will naturally wonder what’s next for them both. Reese will fill in Flo on his future plans, which most likely include getting the heck out of Los Angeles and away from Taylor and the baby. Reese mentioned previously that he had been offered a transfer, so it seems his plan is to disappear.

As for Flo, time will tell what she decides to do, but she may be headed back to Las Vegas to resume her career as a card dealer. Or, she may decide to take some time off to process everything that’s transpired while she was in Los Angeles. She’s going to be feeling overwhelmed by what she and Reese have done for a while, and she might just need to get away.