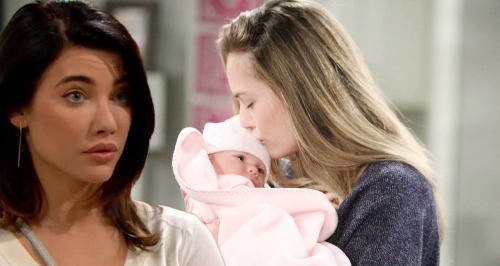 Of course, this is a very recent addition for Steffy. Hope will undoubtedly feel like she should give Steffy some space to bond with the baby. She won’t want to intrude too much, so she’ll try to put Phoebe out of her mind. However, Hope will quickly realize that just isn’t possible. No matter what she does, thoughts of “Phoebe” will creep in again.

The Bold and the Beautiful spoilers say Hope finally won’t be able to take it anymore. She’ll mention Phoebe to Liam and suggest that she’d really like to see her again. Liam may wonder if that’s the best plan right now. He might think it’s doing more harm than good since Hope’s becoming obsessed. Liam may offer a gentle reminder that this is Steffy’s baby, not their beloved Beth Spencer.

Hope’s concerned hubby just won’t want her to get too attached and let herself get hurt. B&B fans know Phoebe is indeed Beth due to Dr. Reese Buckingham’s (Wayne Brady) baby swap. That’s why Hope won’t be able to ignore their unbelievable connection. She’ll beg Liam to take her back to Steffy’s place for another visit, so he’ll have to cave in sooner or later.

The Bold and the Beautiful spoilers say Hope will hold Phoebe again and feel just as much joy as before – maybe even more. She’ll fall more in love with this kid every second, but how will Liam and Steffy feel about that? Some conflict is coming up over the next few weeks, so it’s clear that there’ll be a shift soon enough.

Occasional visits are one thing, but Hope may go overboard thanks to her overwhelming desire to be near this child. Will that spark some marriage issues and perhaps some strife with Steffy, too? We’ll give you updates as other B&B news comes in. Stay tuned to the CBS soap and don’t forget to check CDL often for the latest Bold and the Beautiful spoilers, updates, and news.