BY hellodrdavis on February 2, 2019 | Comments: 2 comments
Related : Soap Opera, Spoiler, Television, The Bold and the Beautiful 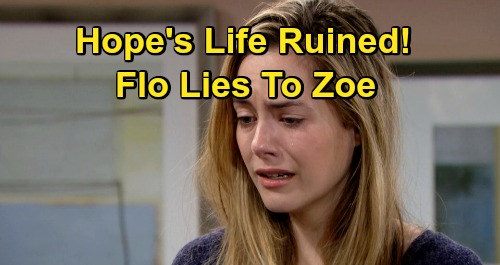 The Bold and the Beautiful spoilers tease that Zoe Buckingham (Kiara Barnes) will decide that it’s time to get some answers. She’s well-aware that her father Reese Buckingham (Wayne Brady) has been on edge ever since he first arrived in Los Angeles. She knows that her dad tends to get himself in trouble, and his erratic behavior has got her worried that he’s in trouble now.

Of course, viewers know that Reese has been acting so strangely because he was in serious debt and had his creditors breathing down his neck for repayment. He had thugs following both him and Zoe and threatening to do Zoe harm. Zoe hasn’t been aware of the thugs following her, but she’s been keenly aware of Reese’s shifty behavior.

But the last straw was when Reese crashed Zoe’s talent show audition with Emma Barber (Nia Sioux) and Emma’s best friend Tiffany (Maile Brady). Reese was acting very scared and protective of Zoe, and Zoe could tell that something serious was up with her dad. But since Reese won’t tell Zoe what’s going on, Zoe’s left to wonder what’s up.

Soon, Zoe will decide to take matters into her own hands and do some sleuth work to get some idea of what Reese is hiding from her. That will lead her to Reese’s apartment, where she’ll enter and start searching for anything she might find.

Zoe will be astonished to find Flo, and she’ll wonder exactly who this woman is who’s in her dad’s apartment. Flo may explain that she’s an old friend of Reese’s, and she’ll probably have a story for Zoe, but Zoe won’t be satisfied. According to B&B spoilers, Zoe will have some tough questions for Flo, so Flo will be shaking in her boots.

Of course, this will all come at a time when Flo’s feeling extremely guilty about what she’s done, but she’ll also know that the whole baby swap scam and adoption was put in motion in the first place to keep Zoe safe, so it looks like Flo will keep her mouth shut for now.

But Zoe’s run-in with Flo will likely spur Zoe to do even more investigating from here. B&B spoilers say that Zoe will even get Xander Avant (Adain Bradley) to help her investigate further. Do you think that Zoe’s going to blow Reese’s plot wide open? Stay tuned to the CBS soap and don’t forget to check CDL often for the latest Bold and the Beautiful spoilers, updates, and news.