BY hellodrdavis on February 1, 2019 | Comments: 2 comments
Related : Soap Opera, Spoiler, Television, The Bold and the Beautiful 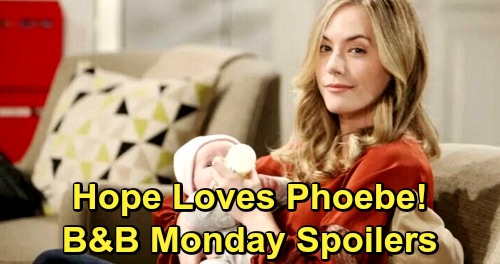 Brooke Forrester (Katherine Kelly Lang) and Ridge Forrester (Thorsten Kaye) were a bit worried about the effect it might have on Hope to see Steffy with a baby so soon after her own loss of Beth Spencer. But it seems that baby Phoebe will have a healing effect on Hope, much like she did with Liam.

After weeks of feeling despair and grief, Hope will suddenly feel an overwhelming sense of hope and optimism for the future as she holds Phoebe. There will be something about Phoebe that stirs up good feelings in her, and she’ll find herself irresistibly drawn to the baby.

Meanwhile, on the new B&B episode on Monday, February 4, Reese Buckingham (Wayne Brady) will continue forth with his plan to get out of Los Angeles. As he told Florence “Flo” Fulton (Katrina Bowden), his plan is to go back to England and get away from all the drama that plagued him in Los Angeles.

But Reese will need to fill Zoe Buckingham (Karina Barnes) in on his plan, and that won’t go so well. According to B&B spoilers, Zoe will be taken aback by Reese’s sudden plan to leave. After weeks of being clingy and protective, now Reese is suddenly leaving, and something about the whole thing will seem off to Zoe.

Zoe will likely question her dad’s plan, and she’ll probably assume that her dad is leaving because he’s in some sort of trouble. This will be the last straw for Zoe, who will decide to get to the bottom of what’s been behind her dad’s erratic behavior of late. Look for Zoe to do some investigating into her dad’s life in the days to come.