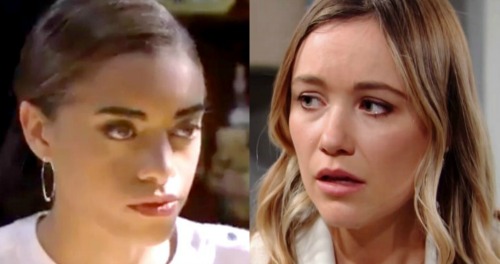 The Bold and the Beautiful (B&B) spoilers tease that Zoe Buckingham (Kiara Barnes) will get a few more puzzle pieces. She can already tell that her father, Dr. Reese Buckingham (Wayne Brady), is in over his head. Zoe doesn’t know what Reese has gotten himself into, but she’ll become even more suspicious when he shares huge plans for their future.

It sounds like Reese will want Zoe to leave town with him ASAP. He’s been establishing a bond with Zoe again, so he won’t want to walk away from that. Plus, Reese will have lingering concerns about those thugs. He’ll soon give hand over all money, but he’ll worry that they could still pose a threat. Reese will just think it’d be better if they left together and started a new life elsewhere.

However, Zoe’s already got a fantastic life in Los Angeles. She’s reunited with Xander Avant (Adain Bradley), which was the goal of coming to LA in the first place. Zoe also has a sweet modeling job that she has no intention of ditching. She may appreciate Reese’s softer side, but she’ll also think it’s weird that he’s suddenly so eager to run.

The Bold and the Beautiful spoilers say Reese will eventually take off on his own, so Zoe will be left with questions. Fortunately, Florence “Flo” Fulton (Katrina Bowden) could provide the answers – if she’s willing, of course! Zoe will end up at Reese’s apartment after he leaves. She’ll just be desperate for any clue about why he rushed off like that.

That’s when Flo will appear and spark a showdown. B&B spoilers state that Zoe will demand to know who Flo is. She’ll sense that Flo’s part of the chaos that convinced Reese to leave, so she’ll want the truth. Flo has been instructed to keep her mouth shut, but can she stick to that goal? It may be hard after Zoe starts ranting and grilling.

Flo probably won’t just blurt out the whole story, but she’ll undoubtedly offer some hints. It won’t be long until Zoe’s on the right track. She’ll realize some baby drama has gone down, so she’ll begin connecting the dots. Zoe will determine that something shady occurred because of Reese and the trouble he was in.

The Bold and the Beautiful spoilers say Zoe will figure out that Beth Spencer is now Phoebe Forrester (Rosalind Aune and Isabella de Armes), the new baby Steffy Forrester (Jacqueline MacInnes Wood) adopted. Will she be the one to expose the shocking truth? Will Zoe blow the lid off Reese’s scheme or keep the news to herself?

Regardless, B&B viewers can expect some tense scenes between Zoe and Flo. They’ll face off in a big way next week, February 4-8, so this next chapter will definitely be exciting. We’ll give you updates as other B&B details emerge. Stay tuned to the CBS soap and don’t forget to check CDL often for the latest Bold and the Beautiful spoilers, updates and news.