BY hellodrdavis on February 1, 2019 | Comments: one comment
Related : Soap Opera, Spoiler, Television, The Bold and the Beautiful 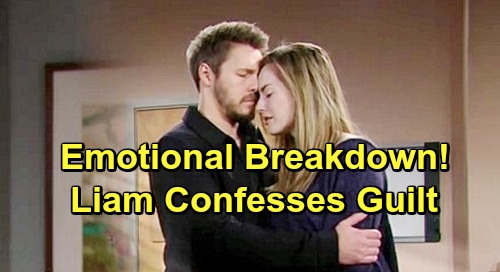 The Bold and the Beautiful spoilers tease that Liam Spencer (Scott Clifton) will finally reach his breaking point. He and Hope Spencer (Annika Noelle) have been living a nightmare since their daughter Beth Spencer’s death on Catalina Island. The grief and despair have been unbearable for the two grieving parents.

But for Hope, the grief hit hard and hit fast, and she was nearly inconsolable for several weeks. She spent her time sobbing and clutching Beth’s ultrasound picture, unable to eat or sleep. She even doubted herself and questioned whether she had done something wrong during the delivery that cause Beth’s death.

Since Hope carried Beth and felt her every kick and move, Hope is feeling Beth’s loss in a way that Liam can’t possibly comprehend. But that’s not to say that Liam hasn’t felt deep grief. He clearly has, and he’s also carried with him the guilt of not being with Hope when she was in labor and delivery.

But Liam hasn’t really been the focus of everyone’s attention and support in the way that Hope has, and he hasn’t expressed his own personal feelings of grief in the way that Hope has. Yes, Wyatt Spencer (Darin Brooks) has been there for his brother, but the topic of their conversations has centered mostly around Hope’s grief and Steffy Forrester’s (Jacqueline MacInnes Wood) adoption.

But soon, it will all hit him, and Liam is going to find himself welling up with emotion over everything he’s been through over the past month. We can’t forget that Liam was the first to learn from Reese Buckingham (Wayne Brady) that Beth had died, and he had the traumatic job of telling Hope that Beth didn’t make it. These things took their toll on Liam.

According to B&B spoilers, Liam will ultimately break down to Hope and express just how horrible he feels over Beth’s death. He’ll admit that he feels guilty over not being there with Hope when she went into labor. Of course, Hope will reassure Liam and tell him that nothing is his fault, and no one could have foreseen how wrong things would go.

It will be healthy for Liam to finally express the feelings he’s been bottling up and not processing because he’s been being “strong” for Hope. Hopefully, Hope will be able to help him through his guilt so that he doesn’t continue to carry that with him every day.

Do you think that Liam’s breakdown will be a big step in Hope and Liam’s eventual healing? Stay tuned to the CBS soap and don’t forget to check CDL often for the latest Bold and the Beautiful spoilers, updates, and news.