BY Heather Hughes on February 13, 2019 | Comments: one comment
Related : Soap Opera, Spoiler, Television, The Bold and the Beautiful 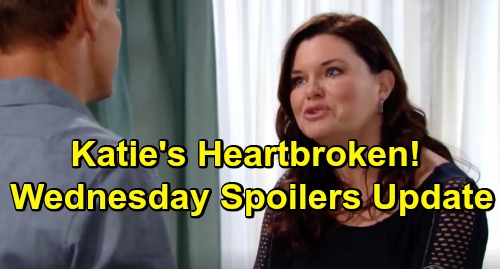 The Bold and the Beautiful (B&B) spoilers update for Wednesday, February 13, tease that Katie Forrester’s (Heather Tom) plans will go awry. Since Valentine’s Day is coming up, Katie will decide she wants to make a big splash. She’ll hope to delight Thorne Forrester (Ingo Rademacher) with a romantic evening, but he’ll have other ideas about what the future holds.

As Katie’s gearing up for their little celebration, Thorne will pump the brakes with a crushing blow. He’ll let Katie know that he’s been mulling over the state of their relationship lately. Thorne will assure Katie that she’s not to blame, but he’ll admit he wants out of this marriage. It appears Thorne will even have divorce papers waiting for Katie to sign.

Of course, Thorne will break the news as gently as he can. He’ll also give Katie time to process all this, but what she’ll really want is an explanation. Katie won’t have a clue what brought on Thorne’s shocker. She thought they were happy up until now, so this split bombshell is coming out of nowhere.

Thorne will understand that it’s a lot to take in, but he’ll try to explain his actions. He’ll insist he has to do what’s right for Katie and Will Spencer (Finnegan George). Thorne will promise he just wants to put them first, but Katie will push him to elaborate on that. She won’t get how abandoning the family they’ve built can possibly be a good thing.

Thorne will likely point to Katie’s lingering connection with Bill Spencer (Don Diamont). He’s witnessed the strong family bond that Katie, Bill and Will share. Thorne’s been feeling like an outsider, so he’s choosing to let Katie and Will go. He may believe he’s standing in the way of the “Batie” fam’s happy ending.

Now that Bill’s turned from the dark side, Thorne may think a reunion is within reach and would be beneficial for Will. Besides, he might argue that Katie truly wants her ex deep down. Katie will beg Thorne not to do this when they’re just beginning their life together. Unfortunately, he’ll be adamant that a breakup is for the best.

Other Bold and the Beautiful spoilers say Florence “Flo” Fulton (Katrina Bowden) will face more pressure than ever. Zoe Buckingham (Kiara Barnes) will refuse to drop her adoption questions, so Flo’s headed for a breakdown. She’ll crack as Zoe’s grilling session becomes too intense to bear. Flo won’t be willing to let Zoe take her accusations to the cops or Steffy Forrester (Jacqueline Macinnes Wood).

B&B fans can expect a stunning confession from Flo. She’ll reveal that she didn’t give birth to “Phoebe Forrester” (Isabella de Armas and Redford Prindiville), but she won’t say who did – at least not yet. Zoe may have to figure out that tidbit on her own, but she’s proven to be a super sleuth so far. You can bet Zoe will unravel the rest of the mystery soon enough.