The Bold and the Beautiful Spoilers: Hope’s Stunning Choice About Marriage – Liam Blindsided by Lope Divorce?

BY Marcy Cohen on February 12, 2019 | Comments: one comment
Related : Soap Opera, Spoiler, Television, The Bold and the Beautiful 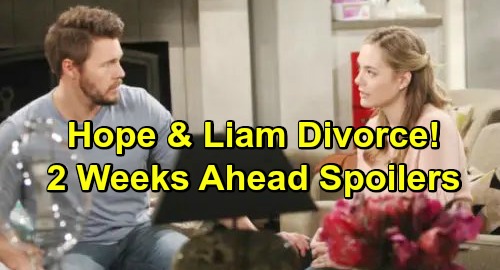 The Bold and the Beautiful (B&B) spoilers tease that Hope Spencer’s (Annika Noelle) marriage is about to take a serious hit. Despite the loss they’re both struggling with, things have been going pretty well for Hope and Liam Spencer (Scott Clifton) lately. In fact, Beth Spencer’s “death” seems to have brought them closer together.

However, that won’t be the case for much longer. Steffy Forrester (Jacqueline MacInnes Wood) could inadvertently lead to some marriage woes. She’s already growing concerned about Hope’s desire to be around “Phoebe Forrester” (Isabella de Armas and Redford Prindiville). Steffy just doesn’t think it’s healthy for Hope to get so attached to another little one right now.

Hope will continue to insist that it’s helpful, but what if Steffy puts her foot down for Hope’s own good? Could Steffy ban Hope from seeing “Phoebe” at some point? It seems reasonable if Steffy believes Hope’s attachment issues are getting worse. That might send Hope into a downward spiral and put a strain on her marriage.

Liam may tell Hope that they have to respect Steffy’s decision, which is true. Steffy has adopted this baby – illegally, but still. She’s “Phoebe’s” mother until Zoe Buckingham (Kiara Barnes) or someone else blows the lid off this secret. Hope and Liam don’t get a say in who Steffy allows to spend time with “Phoebe.”

Nevertheless, this is the only form of peace Hope’s been able to find. By yanking it away, it could set her up for major B&B trouble. During the week of February 18-22, The Bold and the Beautiful spoilers state that Hope will be in crisis mode. She’ll open up to Brooke Forrester (Katherine Kelly Lang) about some of the heartbreaking problems she’s facing.

One of those problems may involve “Phoebe” and not being able to be around her as much as Hope would like. Another problem could be a sudden, growing rift in Hope and Liam’s relationship. Hope will also make a choice regarding her marriage during the week of February 18-22. Could she drop a divorce bomb on Liam or maybe just push to separate for now?