BY hellodrdavis on February 12, 2019 | Comments: one comment
Related : Soap Opera, Spoiler, Television, The Bold and the Beautiful 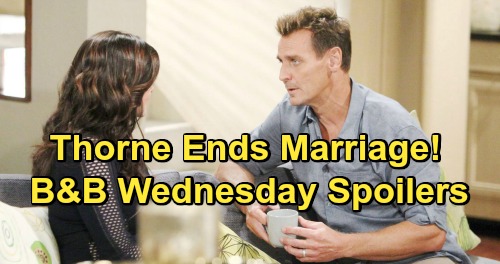 The Bold and the Beautiful spoilers for Wednesday, February 13, tease that Florence “Flo” Fulton (Katrina Bowden) will reach her breaking point. Zoe Buckingham (Kiara Barnes) isn’t going to let up on Flo, and on Wednesday’s episode Zoe will head back to her father’s apartment to confront Flo once more.

Something about the whole story of Flo being the birth mother to Steffy Forrester’s (Jacqueline MacInnes Wood) baby doesn’t sit well with Zoe. She can’t shake the feeling that there’s a reason why Reese Buckingham (Wayne Brady) wanted to keep his involvement in the adoption a secret from Steffy.

This time around, Zoe is going to be determined to get the whole truth out of Flo. She’ll pummel Flo with questions and challenge the various elements of Flo’s story, which will have Flo in a panic. But it won’t be until Zoe threatens to call the police or to call Steffy herself that Flo breaks down. Finally, Flo will crack and offer to tell Zoe the whole truth.

Meanwhile, on the new B&B episode on Wednesday, February 13, Katie Forrester (Heather Tom) will find herself excited about Valentine’s Day. It will be her first Valentine’s Day with Thorne Forrester (Ingo Rademacher), and she’ll want it to be special. Katie will enjoy preparing a nice, romantic evening for the two of them.

But Thorne will spot Katie in the midst of her preparations, and he’ll clearly have something on his mind. It seems that Thorne has been taking stock of his marriage to Katie and he’s realized that things just aren’t working. It wasn’t long ago that he was reminiscing about the special connection he had with his late wife Darla Forrester (Shae Harrison). He may be feeling that his relationship with Katie just doesn’t measure up.

Thorne may also have realized that his marriage to Katie began for the wrong reasons. The two got married as a way of strengthening Katie’s custody case against Bill Spencer (Don Diamont), and Thorne may be feeling that the marriage no longer has a purpose now that the custody dispute is over.

Whatever Thorne’s feeling, he’ll decide that it’s time to come clean to Katie, rather than pretend through Valentine’s Day that everything’s ok. He’ll totally blind-side her with terrible news about their marriage. It certainly looks like he’ll suggest that they go their separate ways and divorce.