BY Heather Hughes on February 12, 2019 | Comments: one comment
Related : Soap Opera, Spoiler, Television, The Bold and the Beautiful 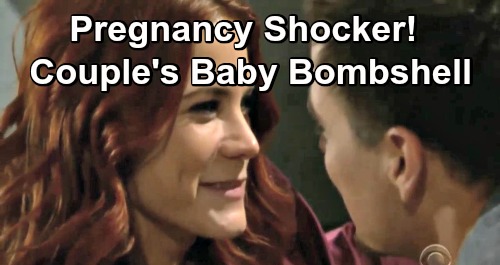 The Bold and the Beautiful (B&B) spoilers tease that one character could have a bun in the oven. B&B’s had baby fever lately and it shows no signs of slowing down. This pregnancy isn’t confirmed just yet, but it makes a lot of sense based on the hints that have aired along with other available info.

During the week of February 18-22, The Bold and the Beautiful spoilers say Sally will face a shocker. She’ll get a whopper of a surprise, so that could certainly line up with a pregnancy bombshell. It fits since Sally and Wyatt recently had a conversation about having kids. They both agreed that they’d like to have them…someday.

Of course, B&B has a way of speeding things along! That could’ve been a clue about what Sally would find out soon. We also can’t ignore the fact that Sally and Wyatt are in bed constantly. Sex is clearly their favorite activity, which boosts their chances here.

If Sally missed a birth control dose or whatever form of protection they’re using failed, a “Wally” baby could easily be on the way. Sally would be stunned, but she’d probably like the idea once she wrapped her head around it. The same goes for Wyatt, who’d make a great dad.

Sally and Wyatt were on the same page about having children one day in the future, so they shouldn’t have a huge problem with moving the timeline up. They seem all in on this relationship. Perhaps this potential pregnancy news will even spark a proposal.

Wyatt’s certainly the kind of guy who likes big, meaningful gestures. A baby could make him realize just how much he wants a future with Sally. Wyatt might show Sally how deep his love is by dropping to one knee and pushing to make this a forever romance.

However, this could get awfully complicated. Sally and Wyatt would inevitably worry about how this pregnancy would affect Hope. The timing would once again be terrible! Plus, Matthew Atkinson (ex-Austin Travers on The Young and the Restless) has joined the B&B cast as the new Thomas Forrester. After Thomas returns to town and rocks Sally’s world, that could be another obstacle for Sally and Wyatt to deal with.