The Bold and the Beautiful Spoilers: Thomas Forrester Returns – Matthew Atkinson of The Young and the Restless New Role

BY Olivia Marie on February 11, 2019 | Comments: 6 comments
Related : Hot News, Soap Opera, Spoiler, Television, The Bold and the Beautiful, The Young and the Restless 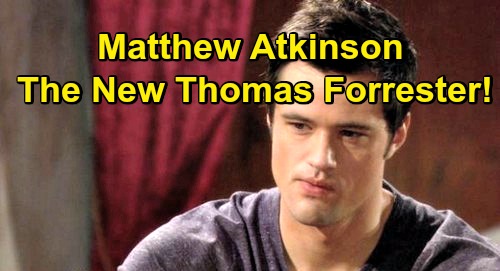 The Bold and the Beautiful (B&B) casting spoilers reveal that Thomas Forrester (Matthew Atkinson) has been recast with a great former The Young and the Restless star filling the role. After Thomas Forrester (formerly Pierson Fode) left Los Angeles last year, he will be coming back with all new drama.

The B&B fans are excited to see what’s ahead for Ridge Forrester (Thorsten Kaye) and Taylor Hayne’s (Hunter Tylo) free-spirited son. Matthew Atkinson will be the new Thomas Forrester according to SOD.

The Young and the Restless fans will remember Matthew well. He played Austin Travers, Summer Newman’s (Hunter King) husband. It was a marriage her parents, Nick Newman (Joshua Morrow) and Phyllis Abbott (Gina Tognoni), did not approve of and they made sure she knew it.

Not long after they were settling into marred life, Travis was murdered. And, what’s worse is after his death, it came out that Abby Newman (Melissa Ordway) had an affair with him, pitting Abby and Summer against each other.

It’s easy to see why the soap fans will be excited about this scoop. Matthew proved his soapy skills by pulling off the dramatic scenes with Abby and Summer on The Young and the Restless.

Matthew said that this is a long time coming and he’s thrilled to be joining the cast. He said he tried out for the role when Pierson Fode took over the part several years ago, but he didn’t make the cut. However, this time, he had the advantage of knowing the casting staff at CBS.

Currently, in the Bold and the Beautiful storyline, Thomas is living in New York with Caroline Spencer (Linsey Godfrey, currently playing Sarah Horton on Days of our Lives) and their son Douglas. He will likely return, with a bone to pick with Bill Spencer (Don Diamont).

Thomas will be irate at Bill for making him believe Caroline was dying, essentially forcing him to leave Sally Spectra (Courtney Hope). The real drama will be how will Sally react to Thomas’ return now that she’s happy with Wyatt Spencer (Darin Brooks)?

Matthew Atkinson will debut as Thomas Forrester in March. Are you excited about Thomas’ return to B&B? Don’t forget to come back to CDL for more Bold and the Beautiful (B&B) spoilers, news, and casting updates!