The Bold and the Beautiful Spoilers: Liam Takes Hope’s Side Against Steffy – Defends Wife’s Right To Spend Time With Phoebe

BY Heather Hughes on February 8, 2019 | Comments: one comment
Related : Soap Opera, Spoiler, Television, The Bold and the Beautiful 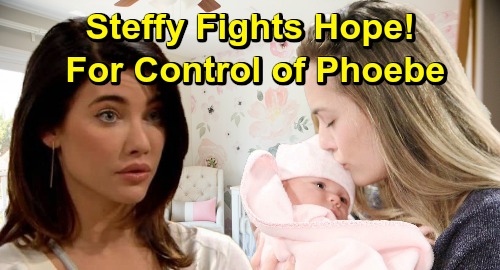 The Bold and the Beautiful (B&B) spoilers tease that Hope Spencer’s (Annika Noelle) clinginess will become a problem. She’ll want to spend more and more time with the baby next week, so Steffy Forrester (Jacqueline MacInnes Wood) will get worried. Hope just lost Beth Spencer and is in a state of terrible grief right now. Is it really a good idea to be bonding with another woman’s child?

Of course, B&B fans know “Phoebe” (Isabella de Armas and Redford Prindiville) is actually Beth, but Steffy doesn’t have a clue. As a result, she won’t be sure if all this time with “Phoebe Forrester” is helping or hurting.

After mulling over her concerns, Steffy will decide to say something. She’ll know she has to broach the subject with sensitivity. Steffy certainly won’t want to offend Liam Spencer (Scott Clifton), but she’ll think he needs to hear this.

The Bold and the Beautiful spoilers say Steffy will open up about her fears regarding Hope’s attachment to “Phoebe.” She’ll think Hope’s going overboard and wonder if maybe Liam should push for distance. It’s not that Steffy will mind sharing “Phoebe” at this point. She’ll just feel like Hope is fueling her pain and setting herself up for another wave of heartbreak.

After all, Hope can’t be around “Phoebe” every waking moment. She gets a baby high whenever she holds her, but she’s bound to come crashing down each time she goes home. The separation should become more and more difficult. That’s the part that will concern Steffy as she relays her thoughts to Liam.

The Bold and the Beautiful spoilers say Liam will also notice Hope’s attachment issues. Nevertheless, he’ll rush to his wife’s defense. Liam will believe Hope knows what she’s doing. He can’t begin to understand Hope’s grieving process and neither can Steffy. Liam will probably suggest they should back off and let Hope do things her way.

Steffy wants Liam to be in “Phoebe’s” life as much as possible. He’ll undoubtedly urge Steffy to let Hope do the same. “Phoebe” needs to grow up in a home filled with love and happiness. Liam may want Steffy to see that Hope can offer that just as much as they can. He’ll advise against fretting about any of this, but he may have some worries of his own deep down!

Will Liam confront Hope about her “Phoebe” infatuation a little later? It seems likely since B&B spoilers point to “Lope” marriage conflict soon. We’ll give you updates as other news comes in. Stay tuned to the CBS soap and don’t forget to check CDL often for the latest Bold and the Beautiful spoilers, updates, and news.