The Bold and the Beautiful Spoilers: See Who Makes Baby Swap Discovery – Hides Truth from Hope and Liam

BY Marcy Cohen on February 7, 2019 | Comments: one comment
Related : Soap Opera, Spoiler, Television, The Bold and the Beautiful 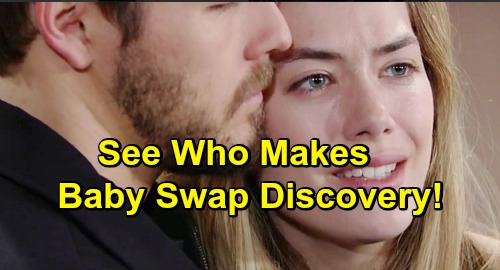 The Bold and the Beautiful (B&B) spoilers tease that Zoe Buckingham (Kiara Barnes) will ultimately put the puzzle pieces together. Thanks to some clues and confessions from Florence “Flo” Fulton (Katrina Bowden), Zoe will figure out that Steffy Forrester (Jacqueline MacInnes Wood) adopted Hope Spencer’s (Annika Noelle) presumed dead baby.

Naturally, Zoe will want to spill this huge news, but she’ll be asked to keep quiet. For her dad’s sake, it looks like Zoe will grant that request. Dr. Reese Buckingham (Wayne Brady) could be in serious trouble if the truth came out now. Plus, Zoe won’t want to put her own modeling job in jeopardy. She may fear that Steffy would take her anger toward Reese out on his daughter.

Of course, the main reason Zoe should keep her mouth shut is to prolong the story! Baby swap plots are always a lengthy ordeal. The longer the faux mom has the kid, the more brutal the aftermath is.

This is the kind of secret that’s bound to trickle out, so we should consider other B&B characters who might learn “Phoebe Forrester” (Rosalind Aune and Isabella de Armes) is actually Beth Spencer.

The Bold and the Beautiful spoilers say Hope and Liam Spencer (Scott Clifton) will find out eventually, but not until the end of this long and winding road. Zoe will likely blab to Xander Avant (Adain Bradley), so that’ll be one more person in the loop. It seems like a no-brainer for Ridge Forrester (Thorsten Kaye) to become part of the secret circle, too.

That would put Ridge in the spot of choosing between his daughter’s happiness or his stepdaughter’s. Ridge has proven that he’ll always put Steffy first, so it’s easy to imagine him keeping quiet to protect her family. This could lead to a divorce from Brooke Forrester (Katherine Kelly Lang) if she learns Ridge kept Hope away from her own child.

Add Bill Spencer (Don Diamont) to the mix and things could really get messy! He’ll always have a soft spot for Steffy, but he also wouldn’t want to let Liam live in pain. Not to mention this would score Bill serious points with Brooke. Still, Bill has caused a lot of strife for Steffy, so causing more could be tough.

Steffy herself may discover the truth and keep mum sooner or later. If Zoe, Xander, Ridge, Bill and Steffy all end up in the know, that’s five people who could betray Hope and Liam by hiding it. Any of them could come clean at some point, but they’d also have motives to stay tight-lipped.

Do you think the secret will trickle out to these characters and perhaps others? Will Hope and Liam practically be the last to find out “Phoebe” is Beth? We’ll give you updates as other Bold and the Beautiful details emerge. Stick with B&B and don’t forget to check CDL often for the latest Bold and the Beautiful spoilers, updates, and news.