BY Kinsley Goldman on February 7, 2019 | Comments: one comment
Related : Soap Opera, Spoiler, Television, The Bold and the Beautiful 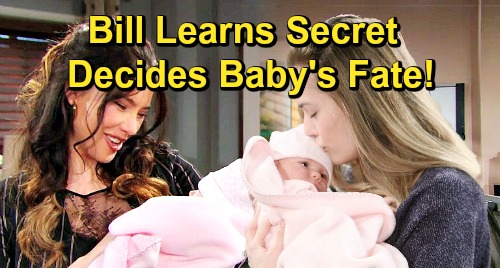 The Bold and the Beautiful (B&B) spoilers tease that Bill Spencer (Don Diamont) will continue to bond with Katie Forrester (Heather Tom). She’s currently married to Thorne Forrester (Ingo Rademacher), but perhaps not for long. Thorne is already feeling insecure about his marriage thanks to Bill and Katie’s reconnection. He can see that there’s still a strong link between them as parents and exes.

Rademacher chose not to renew his contract and taped his last episodes for a while in January. He’s technically on recurring and could return for popups, but we probably shouldn’t expect much. B&B is undoubtedly letting Thorne drift away from Katie for a reason. It seems likely that they’ll divorce, so Bill have an opportunity swoop in and put his family back together.

Of course, Bill tends to think whichever woman he’s with at the time is the love of his life. He’s been trying to prove he’s a changed man to win Brooke Forrester (Katherine Kelly Lang) back, but she’s committed to Ridge Forrester (Thorsten Kaye) for now. That’s probably why B&B is choosing to keep Bill busy with Katie. They could be laying the groundwork for a crucial story, but they have to wait on launching it.

If Bill stumbles across the truth down the road, it would open up all kinds of possibilities. Let’s say Ridge Forrester (Thorsten Kaye) also learns what’s up and stays quiet to preserve Steffy’s family.

Coming clean to Brooke could be Bill’s ticket to a reunion. He could prove that he’s the one who’s loyal to her. Bill could show that he can be honest and be the better man he’s striving for.

However, the decision may not be quite that easy. If it weren’t for Bill, Steffy and Liam would probably be planning on having their second biological child right now. They’d likely be happy and in love without Bill’s intervention.

Steffy was a willing participant in the hookup that sent things downhill, but the spoiled “Steam” reunion is all on Bill. He manipulated the situation, which is what gave Hope the chance to get pregnant in the first place. Could Steffy guilt-trip Bill into staying quiet? It’s a possibility, especially since there’s no way Bill can keep up this “changed man” routine forever.

Bill works best as a grey character who leans toward bad guy end of the spectrum. If Bill could nearly blow up Liam over a skyscraper, he could certainly hide the truth about Beth from him. Bill might feel like he owes this to Steffy, especially if Liam and Hope get pregnant with another child by then. Maybe Bill would feel like he should just leave all this alone.