The Bold and the Beautiful Spoilers: Thursday, February 7 Update – Wyatt Gets a Huge Beth Clue – Guilty Liam Pours His Heart Out 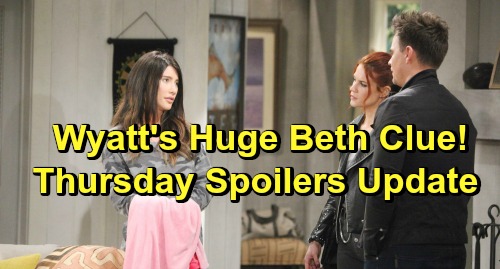 The Bold and the Beautiful (B&B) spoilers for Thursday, February 7, tease that Liam Spencer (Scott Clifton) will finally unleash all the guilt he’s been struggling with. Since Hope Spencer (Annika Noelle) has been in so much pain, Liam’s been keeping his own emotions bottled up. He undoubtedly worried that sharing would make Hope’s sorrow worse.

However, Liam just won’t be able to take it anymore on Thursday. He’ll ultimately admit that he blames himself for Beth Spencer’s death. B&B viewers know Kelly Spencer (Chloe Pennington and Chloe Teperman) came down with a fever just before Hope and Liam’s flight. Liam sent Hope ahead to Catalina Island while he stayed behind to support Steffy Forrester (Jacqueline MacInnes Wood) and their daughter.

Between that delay and the weather delays that followed, Liam couldn’t be there for Hope when she needed him most. He missed the birth and feels terrible about it. The Bold and the Beautiful spoilers say Liam will pour his heart out to his compassionate wife. Hope won’t hold him responsible at all, but Liam will still want to get all this guilt off his chest.

Liam wonder if he somehow could’ve prevented Beth’s demise. He may think that if he’d been on the island with Hope, he could’ve gotten her to the clinic sooner. Even if Liam couldn’t change Beth’s fate, he’ll at least wish he could’ve been by Hope’s side. Liam will hate that poor Hope had to feel so distraught and alone.

Fortunately, Hope will offer plenty of reassurance. She’ll make it clear that this was an unforeseen medical issue, so Liam shouldn’t beat himself up over it. Hope may suggest that she’s struggled with guilt as well, but they both need to reach a place of peace about that – especially since Beth isn’t dead at all! Only Dr. Reese Buckingham (Wayne Brady) could’ve prevented what transpired that night.

Meanwhile, Wyatt Spencer (Darin Brooks) and Sally Spectra (Courtney Hope) will stop by to congratulate Steffy. They’ll want to meet “Phoebe Forrester” (Rosalind Aune and Isabella de Armes), but they’re in for a big surprise when they do! Wyatt will be amazed by how much Kelly and “Phoebe” resemble each other. He’ll think it’s downright uncanny and wonder if Sally thinks so, too.

Sally will agree that Kelly’s adopted sister indeed looks like her. Steffy believes “Phoebe” and Kelly were meant to be together, so she’ll just view the resemblance as more proof. The Bold and the Beautiful spoilers say Steffy will form a stronger connection with “Phoebe” every day, so the heartache ahead is sure to be rough.

B&B fans won’t want to miss Thursday’s fantastic scenes. We’ll give you updates as other news comes in. Stick with the CBS soap and don’t forget to check CDL often for the latest Bold and the Beautiful spoilers, updates, and news.