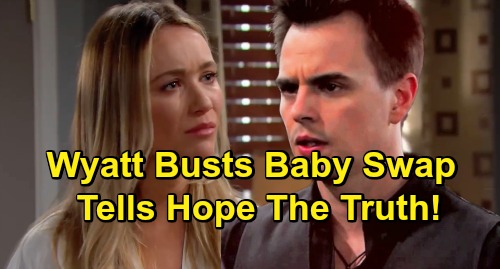 The Bold and the Beautiful (B&B) spoilers tease that Wyatt (Darin Brooks) will notice some stunning similarities soon. During a visit with Phoebe Forrester (Rosalind Aune and Isabella de Armes), Wyatt will realize how much she looks like Kelly Spencer (Zoe Pennington and Chloe Teperman). He’ll pick up on so many things that make Phoebe and Kelly seem like biological sisters.

Wyatt obviously won’t think that’s true just yet, but he’ll still feel like the resemblance is uncanny. He’ll tell Sally Spectra (Courtney Hope) his thoughts on the matter, so she’ll back him up. Sally will be just as taken aback by how much Phoebe truly appears to belong in this family.

The Bold and the Beautiful spoilers say this could be a major shift in the story. Wyatt’s suspicions may grow as he finds out more about the shady adoption.

That might lead to a serious confrontation between Flo and Wyatt. Katrina Bowden recently dropped a huge hint that points in that direction. She talked about how much she enjoys working with Darin Brooks in an interview with Soap Opera Digest. Bowden implied that they’d have scenes together, and there’s no good reason for that unless Wyatt’s going to learn the swap shocker.

“Darin has been great,” Bowden gushed. “He’s the person I read with when I read in front of the producers…” You don’t usually read with someone in front of producers if you aren’t going to appear on screen together later. B&B seemingly wanted to get a grip on how some pivotal scenes between Flo and Wyatt would go.

If Wyatt pries the truth out of Reese’s partner in crime, he just might make a beeline over to the cabin and give Hope Spencer (Annika Noelle) updates immediately. How could Wyatt stand by and say nothing after everything Hope’s endured?

He’d feel bad about ripping Phoebe out of Steffy Forrester’s (Jacqueline MacInnes Wood) life, but probably not bad enough to keep a child from her true mother.

Based on Katrina Bowden’s accidental leak, it sounds like Wyatt may blow the lid off this baby scheme and change lives forever. The Bold and the Beautiful fans won’t want to miss what’s in store! We’ll keep you posted as other B&B news comes in. Stick with the CBS soap and don’t forget to check CDL often for the latest Bold and the Beautiful spoilers, updates and news.