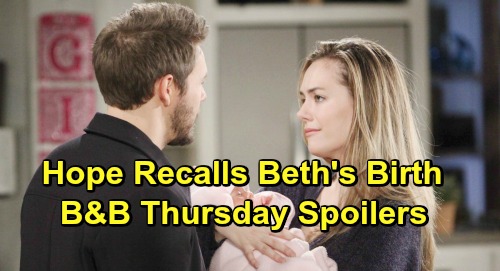 The Bold and the Beautiful spoilers for Thursday, February 14, tease that there will be plenty of drama on Valentine’s Day. First off, Zoe Buckingham (Kiara Barnes) will get the whole sordid story about the baby switch from Florence “Flo” Fulton (Katrina Bowden). Zoe’s just learned from Flo that Reese Buckingham (Wayne Brady) “switched the babies,” but there’s plenty more to be told.

Zoe will get an earful as Flo spills how Reese led a woman named “Hope” to believe that her baby had died, when in fact the baby lived and got adopted to Steffy Forrester (Jacqueline MacInnes Wood). Of course, Zoe will know that the “Hope” in question is actually Hope Spencer (Annika Noelle), and that the baby who allegedly died was Beth Spencer.

Next, on the new B&B episode on Thursday, February 14, Hope will decide that it’s time for her to address something that’s been bothering her ever since she lost Beth. Hope has the unshakeable feeling that if she had not lost consciousness on the night of Beth’s birth, then Beth would have somehow survived the delivery.

So, Hope will decide to go back in time and try to remember everything that happened on the night of Beth’s delivery. With Liam by her side, Hope will close her eyes and attempt to calmly relive the delivery, as difficult as it may be. But what will she remember?

Finally, on Thursday, February 14, two couples will have polar opposite Valentine’s Day experiences. Sally Spectra (Courtney Hope) and Wyatt Spencer (Darin Brooks) will spend some quality time in the bedroom as they celebrate their love. These two are as happy as can be together and will enjoy each other’s company in the spirit of Valentine’s Day.

But for Katie Forrester (Heather Tom) and Thorne Forrester (Ingo Rademacher), the mood will be somber. Thorne’s just dropped a major bomb on Katie, telling her that he thinks their marriage was a mistake, and he presented her with annulment papers. Katie was stunned into silence, but on Thursday’s episode, she’ll lash out at Thorne.

When Katie married Thorne, she believed it was forever, and she never would have brought him into her home with Will Spencer (Finnegan George) if she thought the arrangement was temporary. Sure, they got married quickly and partially for the sake of Katie’s custody dispute with Bill Spencer (Don Diamont), but Katie really loved Thorne and wanted more than anything to be his wife.

Katie will express her displeasure with Thorne’s move, but it doesn’t look like Thorne will budge in his decision. He already went to the trouble of getting annulment papers drawn up, so he’s serious about the decision, and Katie will have to accept it.