BY hellodrdavis on March 26, 2019 | Comments: one comment
Related : Soap Opera, Spoiler, Television, The Bold and the Beautiful 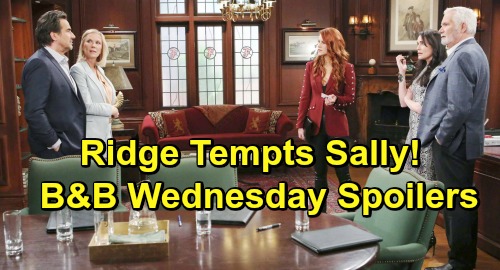 The Bold and the Beautiful spoilers for Wednesday, March 27, tease that Sally Spectra (Courtney Hope) is in for a big surprise. She and Wyatt Spencer (Darin Brooks) have been preparing for their big move to Spencer Publications, where Sally is slated to head the new “Spencer Fashions.” Sally’s excited about her new opportunity and plans on being a united front with Wyatt at Spencer.

But B&B spoilers say that Ridge Forrester (Thorsten Kaye) will introduce a wrinkle into Sally’s plan. Ridge will get an eyeful of Sally’s athletic wear designs, and he’ll get an idea. He’ll want the designs for Forrester Creations, so he’ll ask Sally to stay on at Forrester.

Sally will be touched, and chances are that her first instinct will be to turn down the offer, since she and Wyatt have big plans for their venture at Spencer. But it looks like Ridge may make her a particularly lucrative offer. Of course, Thorne Forrester (Ingo Rademacher) has recently left Forrester, so there’s his vacant position that Ridge could offer to Sally.

Whatever the case, B&B spoilers indicate that Sally will seriously consider Ridge’s offer to stay at Forrester. But that will put her in a tight spot with Wyatt and Bill Spencer (Don Diamont), who are both counting on her to head up Spencer Fashions. Sally will have a tough decision on her hands, as she’ll want to look out for herself while still honoring all the work that Wyatt did to get her the Spencer gig.

Meanwhile on the new episode of B&B on Wednesday, March 27, Florence “Flo” Fulton (Katrina Bowden) will catch up a bit with Wyatt, and she’ll reconnect with Quinn Forrester (Rena Sofer). It’s been years since Quinn has seen Flo, and she’ll be thrilled to see the girl she knew all grown up and thriving.

B&B spoilers say that during the course of their conversation, Wyatt will encourage Flo to remain in Los Angeles rather than return back home to Las Vegas, and it looks like Quinn will enthusiastically agree. In fact, it appears that Quinn will really warm up to Flo and welcome Flo’s reunion with Wyatt…perhaps a little too much.

In fact, Quinn’s enthusiasm with Flo’s return to Wyatt’s life will be a bit much for Sally to deal with, and Sally will ultimately end up feeling slighted and under-appreciated by Quinn as Quinn gushes over Flo. Look for some difficulties to arise between Sally, Quinn, and Wyatt over the Flo situation in the future.