The Bold and the Beautiful Spoilers: Wyatt Betrayed by Sally, Fashion House and Romance in Jeopardy 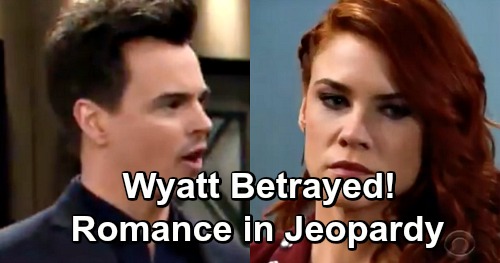 The Bold and the Beautiful (B&B) spoilers tease that Sally Spectra (Courtney Hope) will rethink her recent deal with Bill Spencer (Don Diamont). Wyatt Spencer (Darin Brooks) really went to bat for Sally and scored her a fashion house revival. Sally was beyond grateful, but some upcoming news could change things a bit.

After Ridge Forrester (Thorsten Kaye) sees Sally’s new athletic line, he’ll be blown away by what she brings to the table. Ridge will feel like Sally is a real asset to Forrester Creations, so he won’t want to lose her. That’s why Ridge will take steps to keep Sally on board. He’ll make Sally an enticing offer, which will leave her questioning her decision to depart Forrester Creations and start Spencer Fashions.

Of course, this will be a pretty complicated situation for Sally. She was genuinely touched over the way Wyatt fought for her future. Wyatt may not have even gotten back in the game with Bill if it hadn’t been for Sally. He really wanted to make this happen for his girlfriend, so he was willing to rejoin Spencer Publications like Bill requested.

Still, Sally will be starting from scratch over there. She’ll have to try clawing her way to the top again, and there’s no guarantee that’ll work. If Spencer Fashions doesn’t generate enough money, you’d better believe Bill will scrap the project in a heartbeat. It’s all about those dollar signs for Bill.

Sally would face less risk by sticking with Forrester Creations. They’re an established brand with loyal customers. Ridge’s generous deal will definitely be something Sally considers. She’s been dealt some tough blows in her lifetime, so Sally may feel like taking the easy way out for once.

In the end, The Bold and the Beautiful spoilers say Sally will have to do what’s best for her personally. She won’t want to hurt Wyatt’s feelings, but she will if she thinks it’s the right call. Either way, Wyatt’s bound to be upset. After all the work he did to pull this off, he may feel like Sally’s betraying him or at least being ungrateful.

This could be something that inches Wyatt in Florence “Flo” Fulton’s (Katrina Bowden) direction. It’s worth mentioning that Quinn Forrester (Rena Sofer) will absolutely adore Flo, so that’ll be another issue for Sally and Wyatt to tackle. Bottom line, B&B fans can expect major trouble in paradise.

In our chat with the Spencers we surprised @don_diamont with a message from some of the #BoldandBeautiful cast in honor of his 10th Anniversary! To watch the full video, click here: https://t.co/HTB7yD0Yzq pic.twitter.com/BSET6gtW3j