BY hellodrdavis on March 26, 2019 | Comments: 2 comments
Related : Soap Opera, Spoiler, Television, The Bold and the Beautiful 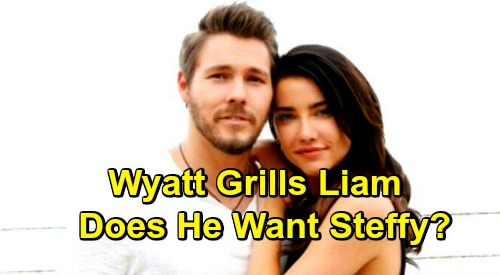 The Bold and the Beautiful spoilers tease that Liam Spencer (Scott Clifton) will soon get some tough love from his brother Wyatt Spencer (Darin Brooks). Liam’s been going through a terrible time lately. Not only did he lose his daughter Beth Spencer, but his wife Hope Spencer (Annika Noelle) has been in utter despair ever since Beth’s death. Hope has been isolating in her grief and hasn’t let Liam in to help her.

And that has left Liam without much support to help him in dealing with his own grief. He’s still mostly estranged from Bill Spencer (Don Diamont), so the only person he really has to reach out to is Wyatt. B&B spoilers say that Wyatt and Liam will soon sit down together and Liam will unleash some of his deepest fears and frustrations to his brother.

Liam and Wyatt will likely revisit everything that’s happened with Hope and Steffy Forrester (Jacqueline MacInnes Wood) lately. Of course, Steffy took off for Paris with Kelly Spencer (Zoe Pennington and Chloe Teperman) and Phoebe Forrester (Isabella de Armas and Redford Prindiville) in reaction to Hope’s recent behavior. Steffy wanted Hope and Liam to have a chance to work on their marriage outside of the distraction of herself and the girls.

Of course, this occurred after Hope basically tried to force Liam and Steffy back together. Liam is now feeling exasperated with Hope’s behavior, and he desperately wants to move forward in his marriage with Hope. But Hope doesn’t seem interested in moving forward; she’s pretty much stuck in her grief and in the here and now.

Liam will share all of this with Wyatt and Wyatt will offer words of wisdom. Of course, Wyatt will support Liam in whatever he decides to do, but B&B spoilers say that Wyatt will also ask Liam some difficult questions. These questions will likely have to do with Liam’s marriage and his feelings about Steffy.

Wyatt may ask Liam whether he thinks, deep down, that Hope is right and that he and Steffy should reunite as a family with Kelly and Phoebe. Liam will almost certainly say no at first, but Wyatt may force Liam to confront the question a little more deeply. After all, it would be natural for Liam to desire – at least on some level – to be a nuclear family with his daughter.

Wyatt may also want to know about Liam’s true feelings for Hope. After all, Hope and Liam got married largely because Hope was pregnant with Beth. Now that Beth is gone, Wyatt may be wondering whether she was the glue that held Lope’s marriage together. He may ask Liam to confront the possibility that, without Beth, the marriage is irrevocably broken.

Of course, all of this probably won’t make Liam feel any better, but it will force him to deal with the reality of the situation. After all, Hope’s behavior is sending a clear message, and Liam needs to deal with it head-on. But will Wyatt’s influence lead Liam to rethink his marriage to Hope and start considering the possibility of a Steam reunion?

It’s certainly looking like that may be the case, especially once Liam finds that he isn’t getting anywhere productive in his marriage with Hope. B&B spoilers say that Hope will soon shut Liam down when he offers up an idea about their future, which may demonstrate for Liam that Wyatt might be right. We’ll see what the future holds for Hope, Liam, and Steffy, but it sure looks like we might be seeing a Lope demise and a Steam revival in the future.

Do you think that Liam will start to rethink his marriage to hope and begin to envision a Steam reunion? Stay tuned to the CBS soap and don’t forget to check CDL often for the latest Bold and the Beautiful spoilers, updates, and news.