BY Heather Hughes on March 26, 2019 | Comments: one comment
Related : Soap Opera, Spoiler, Television, The Bold and the Beautiful 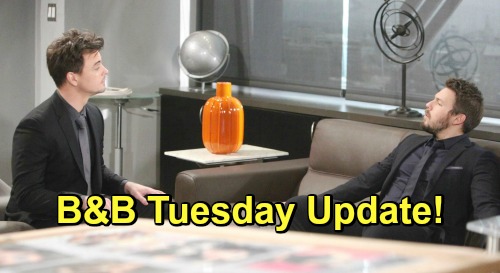 The Bold and the Beautiful (B&B) spoilers for Tuesday, March 26, tease that Brooke Forrester (Katherine Kelly Lang) and Dr. Taylor Hayes (Hunter Tylo) will continue ripping into each other. When these enemies fight, it always gets vicious! Taylor has pretty much pushed Brooke to her breaking point, but she’ll somehow manage to take things even further.

As Brooke and Taylor’s argument erupts into a full-fledged brawl, Ridge Forrester (Thorsten Kaye) will rush in. He’ll scold his wife and ex for their terrible behavior, but they’ll put the blame on each other. Of course, Ridge won’t care which woman has more culpability in the physical confrontation. He’ll just want them to stop and take some time to cool off.

Once Ridge pulls Brooke away from the conflict, he’ll insist she has nothing to worry about. Ridge will make it clear that he wants Brooke and only Brooke. However, that won’t stop Brooke from worrying about her rival. She knows Taylor can be ruthless when she’s got something she wants.

Even if Taylor can’t destroy “Bridge’s” marriage, she could still destroy “Lope’s.” Brooke will have to keep a close eye on Hope Spencer’s (Annika Noelle) relationship with Liam Spencer (Scott Clifton). She won’t want Taylor to make any trouble for them, especially now that Steffy Forrester (Jacqueline MacInnes Wood) has provided the space they need.

Other Bold and the Beautiful spoilers say Wyatt Spencer (Darin Brooks) will push for honesty. He’ll ask Liam some difficult questions about his future, so Liam will have to dig deep for the answers. Wyatt may wonder if Liam truly thinks he’ll be able to move on with Hope. He might even ask if Liam’s having any second thoughts about rejecting Hope’s offer.

Hope gave Liam a free pass to reunite with Steffy, but he immediately shut her down. That may not be something Liam regrets just yet, but it could be eventually. Regardless, Liam will talk about the current state of his marriage and his expectations for what’s next. He may admit he doesn’t want to get his hopes up too high. Liam knows they’ve suffered a great loss, so rebuilding is going to be a struggle.

Douglas Forrester (Henry Joseph Samiri) seems to be helping Hope heal, but his latest request has thrown her for a loop. B&B fans know Caroline Spencer (Linsey Godfrey) recently passed away, so Douglas has really been bonding with Hope. That’s why he asked if she’d be his new mommy, but this should bring some uncomfortable moments.

Hope will try to handle this as delicately as possible. She may suggest that she can’t take Caroline’s place, but she can give Douglas lots of love as a friend. Hope may add that Thomas Forrester (Matthew Atkinson) is still around to be fantastic dad. You can bet Thomas will chime in as well and try to get Douglas talking about something else.

Nevertheless, this awkward topic will stick with Thomas and Hope. It won’t be long until Liam gets updates, too. The Bold and the Beautiful spoilers say Liam will definitely have some concerns about Hope and Douglas’ attachment to each other. We’ll keep you posted as other B&B news comes in. Stay tuned to the CBS soap and don’t forget to check CDL often for the latest Bold and the Beautiful spoilers, updates, and news.