The Bold and the Beautiful Spoilers Douglas Asks Hope to Be His New Mommy – Liam Fears Growing Obsession, Thomas Stunned

BY Marcy Cohen on March 22, 2019 | Comments: one comment
Related : Soap Opera, Spoiler, Television, The Bold and the Beautiful 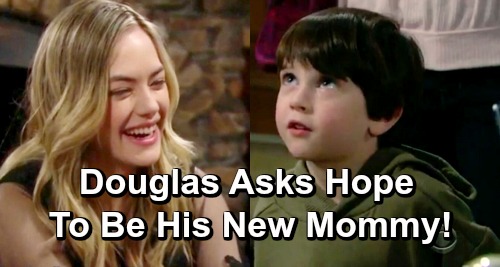 The Bold and the Beautiful (B&B) spoilers tease that a big surprise is headed Hope Spencer’s (Annika Noelle) way. It turns out this shocker will also affect Liam Spencer (Scott Clifton) and Thomas Forrester (Matthew Atkinson). Douglas Forrester (Henry Joseph Samiri) will be at the heart of this bombshell, which will come from an innocent place. He’s just a kid, so he won’t understand the impact this will have.

B&B fans can expect a special request during the week of March 25-29. Douglas has been connecting with Hope ever since he returned to town. He misses Caroline Spencer (Linsey Godfrey), but Hope’s done everything she can to make him feel better.

Hope fulfilled Douglas’ mac and cheese request as well as comforted him about Caroline’s death. She later played card games with Douglas and even did the baby shark dance. It’s clear that Douglas is forming a strong emotional bond with Hope. She’s helping him find happiness while he’s dealing with this tough loss.

When Hope assured Douglas that Caroline was watching over him in heaven, Douglas insisted he need a mommy there with him instead. There’s a good chance that’ll tie in with his upcoming request. The Bold and the Beautiful spoilers say Douglas will approach Hope and pose a stunning question. His wish will definitely catch Hope, Thomas and Liam off guard.

It sounds like Douglas will ask Hope to be his new mommy. If so, he won’t mean any disrespect to Caroline and the love she brought to his life. Douglas will just view Hope as a solid replacement since he can’t have the real deal. Now that he’s bonded with Hope, he won’t want to lose her, too. To Douglas, it’ll make perfect sense for Hope to slide in the mommy spot and take care of him.

Of course, Hope may gently point Douglas in another direction. She could insist that Caroline is always going to be his mother, but they can still be good friends. Douglas will likely forget about the conversation and start playing, but Hope certainly won’t forget. Neither will Liam and Thomas, who may be left uncomfortable by all of this.

The Bold and the Beautiful spoilers say this could kick off some concerns for Liam. He may fear that Douglas will give Hope the wrong idea and launch another detrimental kid obsession. If Liam confronts Hope about that, he could start a serious fight.

B&B viewers won’t want to miss the hot drama ahead. We’ll give you updates as other news comes in. Stay tuned to the CBS soap and don’t forget to check CDL often for the latest Bold and the Beautiful spoilers, updates, and news.