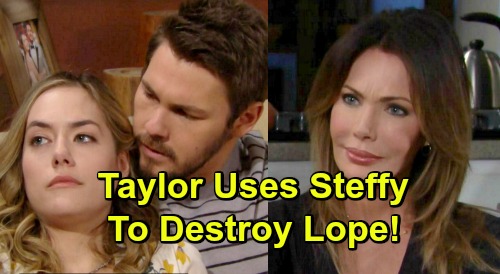 The Bold and the Beautiful (B&B) spoilers tease that Steffy Forrester (Jacqueline MacInnes Wood) will be offscreen for a while thanks to Wood’s maternity leave, but she’ll remain an important part of the story. There’ll be plenty of drama waiting for Steffy when she gets back, so let’s talk about how B&B will set it up.

Dr. Taylor Hayes (Hunter Tylo) definitely make a bit of a mess, which may or may not work out well for her daughter. While Steffy’s out of the picture, Taylor will be busy matchmaking. Brooke Forrester (Katherine Kelly Lang) obviously won’t approve of Taylor’s twisted strategies and zero-boundaries approach.

During the week of March 25-29, Brooke fume over Taylor’s desire to drive Hope Spencer (Annika Noelle) and Liam Spencer (Scott Clifton) apart. That’ll escalate to some harsh accusations during the week of April 1-5. The Bold and the Beautiful spoilers say Brooke will suspect there’s a deeper reason behind Taylor’s agenda. She’ll think this goes back much further than Taylor’s letting on.

Brooke will bring up her history with Taylor and the hatred they’ve had for each other over the years. The Bold and the Beautiful fans know they’ve both done some nasty things, so Brooke will think the horrible past is playing a role in the present. She’ll accuse Taylor of using Steffy as part of her revenge plot.

In other words, Brooke got the prize. She’s married to Ridge and Taylor can’t have him – right now anyway! Brooke will think that’s why Taylor’s obsessed with making sure Steffy wins Liam back. She’ll feel like Taylor refuses to let her daughter be a love triangle loser, too. Brooke will view this as vengeance through another generation since it’d make Hope the loser instead.

Taylor may admit the past stings and she’s always going to have issues with Brooke. However, she’ll deny that their complicated history is influencing anything. Taylor will insist this is about Steffy, Liam, Kelly Spencer (Zoe Pennington and Chloe Teperman) and “Phoebe Forrester” (Isabella de Armas and Redford Prindiville). She’ll maintain that she wants what’s best for them and that’s being a family.

Brooke will still feel like Taylor’s out for revenge, so she’ll do whatever it takes to stop her rival and “Lope’s” destruction. Will Brooke succeed or fail miserably? Will Steffy come home to Liam and Hope’s shattered marriage? We’ll give you updates as other B&B news comes in. Stick with the CBS soap and don’t forget to check CDL often for the latest Bold and the Beautiful spoilers, updates, and news.