BY Heather Hughes on March 20, 2019 | Comments: one comment
Related : Soap Opera, Spoiler, Television, The Bold and the Beautiful 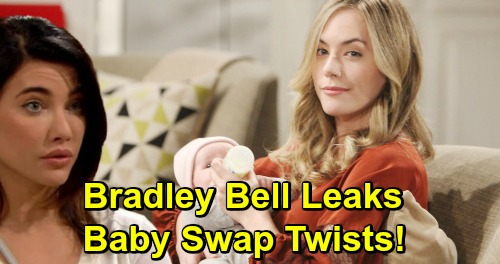 The Bold and the Beautiful (B&B) spoilers reveal that some exciting things are ahead on the CBS soap. Bradley Bell, B&B’s head writer and executive producer, offered some great teasers and other info on what’s to come. He noted that the baby swap storyline will remain in play along with some other hot plots.

For starters, let’s address an issue that some Bold and the Beautiful fans have been in denial about. Despite the obvious clues, some people had a hard time accepting that Beth Spencer was the baby Steffy Forrester (Jacqueline MacInnes Wood) adopted. Even after the show had Dr. Reese Buckingham (Wayne Brady) explain everything, there were those who convinced themselves there’d be a twist.

However, that’s ridiculous at this point. The Bold and the Beautiful has made it very clear that this is Hope Spencer’s (Annika Noelle) child, so don’t expect a rewrite. “It’s always wonderful to have a secret,” Bell said. “Hope has held her baby in her arms, not knowing, and hopefully the audience is screaming, ‘Hope, that’s Baby Beth!’ I think we have generated some intrigue with this story.”

Of course, just because there’s no twist in that part of the storyline doesn’t mean there won’t be other twists along the way. In fact, Bell suggested we can count on them! “The secret of Hope’s baby is one that’s going to have so many twists and turns,” Bell said. He added that he had total confidence that this story would “be a real standout for the series.”

Bell also specifically mentioned what incredible actors Wood, Noelle and Scott Clifton (Liam Spencer) are. It appears that love triangle will continue after Wood’s return from maternity leave. Until then, The Bold and the Beautiful spoilers say Thomas Forrester (Matthew Atkinson) will “stir the pot and bring a little trouble.” He could easily come between Liam and Hope over the next few weeks.

Bell even offered a hint about another story he’s got cooking. It’s one that centers around an important topic, but he doesn’t want to give too much away since it’s still in the early phases. “We also have another social issue storyline,” Bell said. “I can’t get into it, but for 2019, we’re doing some research and that’s something I look forward to penning this year.”

It sounds like some interesting developments are brewing. Are you eager to see what’s in store on The Bold and the Beautiful? We’ll give you updates as other B&B news comes in. Stay tuned to the CBS soap and don’t forget to check CDL often for the latest Bold and the Beautiful spoilers, updates, and news.