BY hellodrdavis on March 20, 2019 | Comments: one comment
Related : Soap Opera, Spoiler, Television, The Bold and the Beautiful 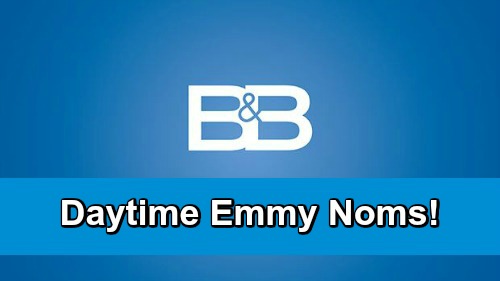 Of course, Jacqueline MacInnes Wood has had a big year on B&B. Her character, Steffy Forrester, has dealt with a lot of heavy drama over the past year. Her marriage to Liam Spencer (Scott Clifton) ended after her affair with his father, Bill Spencer (Don Diamont).

Steffy gave birth to her daughter Kelly Spencer (Chloe Teperman and Zoe Pennington), and then briefly reunited with Liam, but Liam became romantically involved with Hope Logan (Annika Noelle) and ultimately married her.

There have definitely been a lot of ups and downs for Steffy, and Jacqueline MacInnes Wood has portrayed a wide range of emotions over the year. Steffy experienced great joy when she gave birth to Kelly and adopted Phoebe Forrester (Isabella de Armas and Redford Prindiville), and she experienced terrible pain when she lost Liam to Hope. It’s easy to see why Jaqueline was nominated in this category!

Heather Tom, who was also nominated for Best Actress, has also had an impressive year portraying Katie Logan. Katie ended her relationship with Wyatt Spencer (Darin Brooks), which she expertly portrayed as both heartbreaking and necessary, since Wyatt was her son Will Spencer’s (Finnegan George) half-brother.

Katie then rebounded right into a relationship with Thorne Forrester (Ingo Rademacher) and was happy with him until he started pressuring her into fighting Bill for sole custody of Will.

The custody battle itself is where Heather Tom really demonstrated some fantastic acting. She portrayed Katie as a fierce mom who would do anything to protect her son from the disappointment of his then-neglectful father, Bill. Yet, viewers could see just how conflicted Katie was about battling Bill and possibly further separating Will from his dad. It was great work on Heather’s part.

Let’s turn to another category: Best Guest Performer. Among the nominees for this category is none other than Wayne Brady, who portrays Reese Buckingham on B&B! Wayne has been involved in one of the biggest storylines on B&B this year – the baby switch storyline. His character, Reese, did the unthinkable and led Hope to believe that her daughter, Beth Spencer, had tragically died, and he went so far as to put someone else’s dead baby in her arms.

And Reese didn’t stop there. He then arranged to adopt little Beth to Steffy for a huge sum of money, put up by Taylor Hayes (Hunter Tylo). Reese arranged the whole baby switch and adoption because he needed money to pay off the loan shark who was threatening his daughter Zoe Buckingham’s (Kiara Barnes) life. It was a huge mess, and Wayne played it beautifully.

In fact, Wayne was so effective in the role that he’s famously experienced a considerable amount of backlash from some confused fans who have had difficulty separating Wayne from his character, Reese. We suspect that he stands a good chance of winning in this category. Wayne is up against Philip Anthony Rodriguez (Miguel Garcia, GH), Patricia Bethune (Mary Pat Ingles, GH), Kate Mansi (Abigail Deveraux, DOOL), and Thaao Penghlis (Andre DiMera, DOOL).

So, taking into account the actor nominations along with the nominations for Best Drama, Best Writing, and Best Directing, that gives B&B the possibility to walk away with six Daytime Emmys. We wish all of the B&B nominees the best! Stay tuned to the CBS soap and don’t forget to check CDL often for the latest Bold and the Beautiful spoilers, updates, and news.