The Bold and the Beautiful Spoilers: Taylor Plots to Break Up Hope and Liam For Steffy – Brooke Fights for Lope

BY hellodrdavis on March 25, 2019 | Comments: 2 comments
Related : Soap Opera, Spoiler, Television, The Bold and the Beautiful 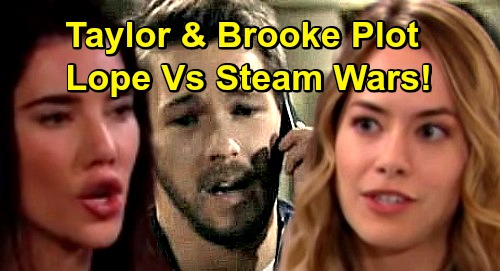 The Bold and the Beautiful spoilers tease that Brooke Forrester (Katherine Kelly Lang) will soon get some alarming news. She’s already furious with Taylor Hayes (Hunter Tylo) after walking in on Taylor kissing Ridge Forrester (Thorsten Kaye), and this will consume most of her energy for the near future. She’ll rail against Taylor and the two ladies will even have a physical altercation before the whole thing’s done.

But Brooke’s frustrations won’t end with Taylor. According to B&B spoilers, she’ll have a bone to pick with Ridge as well. After all, Ridge didn’t exactly pull back right away when Taylor kissed him, and Brooke surely noticed. So Ridge will get an earful from Brooke, and she’ll want to know exactly how the whole thing went down.

And that means that Ridge will have to tell Brooke the whole story about what he and Taylor were discussing in the moments leading up to the kiss. Of course, what they were discussing was Taylor’s theory that Hope Spencer (Annika Noelle) and Thomas Forrester (Matthew Atkinson) should pair up, which would pave the way for Steffy Forrester (Jacqueline MacInnes Wood) to reunite with Liam Spencer (Scott Clifton).

The whole discussion started because Taylor observed Hope interacting with Douglas Forrester (Henry Joseph Samiri) and “realized” that Hope and Douglas needed each other, and that perhaps Hope could settle right into family life with Thomas and Douglas, now that Caroline Spencer (Linsey Godfrey) is gone. And from there, Taylor ended up professing her love for Ridge and ultimately kissed him.

Well, none of this is going to sit well with Brooke. She’ll of course be upset with Ridge about the kiss, but that anger will eventually fade. What Brooke won’t be willing to let go is Taylor’s suggestion about Hope, Liam, and Steffy. B&B spoilers say that Brooke will become highly annoyed and frustrated with Taylor’s continued desire for Steffy and Liam to get back together.

From Brooke’s perspective, Hope has just lost her daughter, and here Taylor is already plotting the demise of Hope’s marriage to Liam. B&B spoilers say that it will absolutely enrage Brooke, and it will likely lead her to take some action of her own.

She’ll probably be alarmed to hear that Hope is spending a considerable amount of energy on Douglas and Thomas, and she’ll likely set out to talk to Hope to find out what’s going on.

Of course, Brooke strongly supports Hope’s marriage to Liam, so she’ll probably do everything she can to convince Hope to stay with Liam and work on her marriage, in an effort to counter any efforts Taylor is making to break up Lope. Brooke can be just as determined as Taylor, so it looks like she’ll be just as forceful in her efforts to keep Hope away from Thomas as Taylor is to push the two together.

Who do you think will win this battle? Taylor or Brooke? Stay tuned to the CBS soap and don’t forget to check CDL often for the latest Bold and the Beautiful spoilers, updates, and news.