BY hellodrdavis on March 25, 2019 | Comments: one comment
Related : Soap Opera, Spoiler, Television, The Bold and the Beautiful 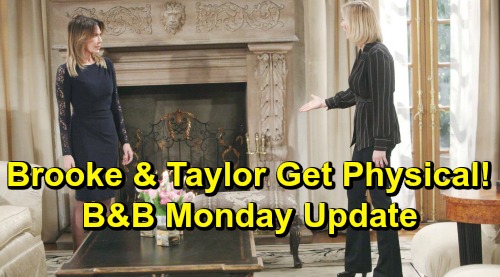 The Bold and the Beautiful spoilers for Monday, March 25, tease that things will really heat up between Brooke Forrester (Katherine Kelly Lang) and Taylor Hayes (Hunter Tylo). Brooke has just witnessed Taylor having a moment with Ridge Forrester (Thorsten Kaye) during which Taylor kissed Ridge and said that she never stopped loving him.

Ridge shut Taylor down immediately and left the scene, but then Brooke emerged from the wings to confront Taylor directly over the indiscretion.

Brooke began by expressing her condolences to Taylor over Caroline Spencer’s (Linsey Godfrey) death, then quickly moved into a monologue about how Taylor kissed her husband and how unacceptable it was.

On Monday’s B&B episode, Brooke will continue her showdown with Taylor and make it perfectly clear that she won’t tolerate Taylor going after Ridge under any circumstances.

According to B&B spoilers, Taylor will only listen to so much from Brooke, and the situation will turn into a heated argument that will last the entire episode and turn physical as we see in the weekly promo video below. The women will rehash their history of opposing each other over Ridge throughout the years, and unfortunately it looks like the argument will degenerate into an ugly scene.

B&B spoilers also say that during the course of their sparring, Taylor will admit to Brooke that she has an ulterior motive where Ridge is concerned. Taylor may point out how unfair it is that Brooke has Ridge, while she is struggling to put her life back together alone. But don’t look for Brooke to be sympathetic to Taylor’s plight. In fact, her admission will likely just make Brooke angrier.

Meanwhile, on the new episode of B&B on Monday, March 25, Thomas Forrester (Matthew Atkinson) and Hope Spencer (Annika Noelle) will continue to spend time together. Thomas has been impressed with Hope’s ability to connect with Douglas Forrester (Henry Joseph Samiri), and the two will discuss him, as well as Thomas’ relationship with Caroline.

B&B spoilers say that Thomas will reveal to Hope that he and Caroline weren’t together romantically at the time of her death, and Hope will be stunned. It looks like Thomas will open up to Hope about his situation with Caroline, which certainly wasn’t bad but wasn’t ideal. Hope will listen attentively and offer her support.

This will all be an opportunity for Hope and Thomas to grow closer, which seems to be where B&B is going with this pairing. And it makes sense when you consider that Thomas and Hope have a lot in common right now. They’ve both sustained a considerable and painful loss, and each feels alone in their grief.